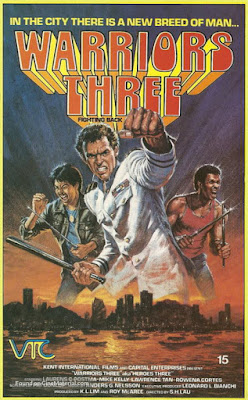 Sailors Dutch Hagan (Postma) and Jim Burstall (Kelly) are on shore leave after traveling from Taiwan to Hong Kong. When a bunch of masked assailants start a brawl with them once they arrive, local private detective and part-time Tai Chi teacher Horatio Lim (Tan) joins in the fray with his newfound friends.

When Burstall goes missing, it sets in motion a chain of events that leads all the way to the top of the Asian high finance industry. An unscrupulous businessman named Winter (Lovett?) wants to monopolize the gold market and it seems Burstall is involved somehow. However, there are a myriad of baddies looking to cause trouble for Hagan and Lim, as well as Hagan’s new love interest, who just happens to be Lim’s sister. These men, naturally, are named Ah “Coffin” Fang (Lim Wai-Kee), Night Club Wu (Hudson Leung), and Junkmaster Cheong (Kim Bill). Of course, many melees ensue. What will happen to the HEROES THREE? 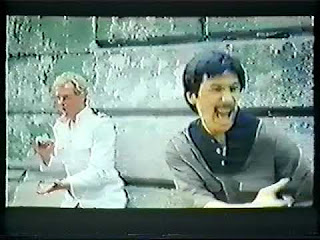 Heroes Three is enjoyable, modest, and entertaining. It’s set in Hong Kong – and one of the movie’s strengths is some of its fascinating location photography – but has something of an international pedigree thanks to some of its American, British, and European cast and crew, as well as the fact that it was written by a guy named Pat Dunlop, who mainly worked in American TV. There’s a mix of the old culture of Hong Kong, and some of the new, modern technology of that time. For example, Lim has a high-tech command center complete with a stand-up arcade machine, and there are other scenes of characters playing arcade games. So the 80’s-ness is on display clearly, which gives it automatic points in our book.


Speaking of which, it all starts with a jaunty, synthy song which we think is called “Looking For You”, and sung by Rowena Cortes, who sings the closing ballad as well. Cortes had a nice career throughout the seventies, releasing five albums and two singles in the decade, even winning the 1976 Hong Kong Popular Song Contest. As far as we can tell, her work for Heroes Three was her last. 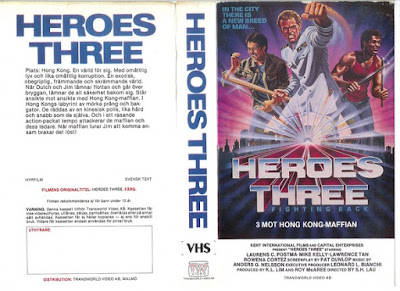 The whole outing kicks off (literally) with not a Fruit Cart chase, but a Fruit Cart fight. After this display, one character calls another, and we quote, “a snoopie”. If anyone has ever called you or anyone you know a snoopie, please write in today. There are some large and funny burned-in English subtitles in some scenes that are quite amusing. Additionally, some poor schnook is not a victim of Chinese water torture, but Chinese milk torture. So, overall, there are some interesting tweaks that let Heroes Three stand out, and they don’t take things overly seriously, so it all has a fun vibe that is easy to like.


As in a lot of movies, there is a goon that looks a lot like David Cross. His name is Max Schwartz in the film, so do look out for him. But all the heavies in the movie are no match for Dutch Hagan, who wears a very intimidating Donald Duck sweatshirt. He has a lot of great activewear in the movie, but that shirt was probably the favorite. And, as if there was any doubt that it’s a Donald Duck sweatshirt, it has the words DONALD DUCK emblazoned in large letters across the top. Why this sweatshirt is made in adult sizes, we may never know.


In the end, Heroes Three is a so-called “Chop-Socky” film with a difference. There’s a lot of action and fighting, but there’s some welcome diversity and it never gets boring. While the movie was released in many countries worldwide over the years, it didn’t have a ton of market penetration here in the U.S., and it was probably overshadowed by the contemporary Ninja Boom of the day. (Just to be clear, there are no ninjas in Heroes Three). Now that it’s on Amazon Prime – as of this writing – we say check it out.

I assume this was filmed in Hong Kong. I wonder if it is more difficult to get permission to film in Hong Kong these days. Cool review.

Thanks Mike! Appreciate the kind words.

That's a good question. Bet it is tricky.