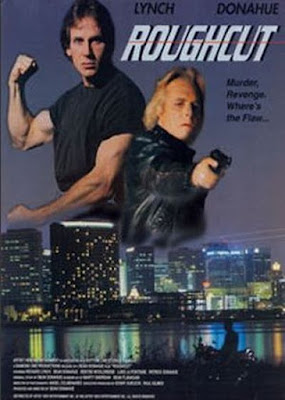 "I need to use the bathroom. I'll have two chicken tacos."-Garrett


Garrett (Sean P. Donahue) is a DJ at the local rock station. When not spinning the latest grunge hits of the day (it was 1994, after all), Garrett loves nothing better than to go on hunting trips with his friend Pauly. When the two guys accidentally witness an illegal diamond buy gone wrong, they become the target of nefarious diamond seller John Caine (Lynch) and his goons. Blade (Patrick G. Donahue) is one of the lead heavies for Caine, probably because he always wears a black trenchcoat and a machete on his belt.

When Pauly is killed by the baddies (not a spoiler because it happens in the beginning), Garrett snaps into action. Getting no help from the police, except for his buddy TJ Boyle (Flanagan), they now take justice into their own hands. Will it be just diamonds that are ROUGH CUT, or will it also be the baddies themselves? Find out today!

As if a string of classics like Kill Squad (1982), Omega Cop (1990), Blood Hands (1990), Savage Instinct (1991), Fighting Spirit (1992) and especially the awesome Parole Violators (1994) wasn’t enough, along comes “Roughcut” – and, yes, the onscreen title is one word, in quotes, just like the similar and equally-fantastic “Geteven” (1993). If you liked any of the above-mentioned titles (and if you don’t, shame on you), then you’ll find a lot to love with “Roughcut”. The line readings from the actors are just as hilarious as the kills, which are just as hilarious as the action scenes and beat-em-up portions. It’s all so much fun you can’t help but love it. 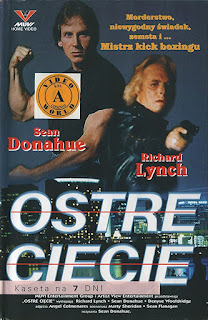 The scene in the Mexican restaurant is a movie highlight and must be seen. We also appreciated how Garrett used his DJ abilities to trick the baddies. Interestingly, his DJ name is “The Parole Violator”. Something about those two words must really have stuck with the Donahue family. Speaking of which, Patrick G. Donahue plays Blade with aplomb, and the fact that his name is Vinnie but is continually bugging his co-workers to adopt his scary new nickname seems to be a running gag. He loves his machete so much, he drives his car with one hand so he can always be holding his machete with the other. Now that’s dedication to your craft.

Whenever you see the names Sean or Patrick Donahue on a movie, you know you’re in good hands. We could go on all day about the many highly entertaining and enjoyable moments in “Roughcut”, but to save time we’ll just note for the record that no explanation is given as to why Garrett is a master of Martial Arts and deception, and there’s an extended scene of characters rolling down a hill that rivals the one in Black Sheep (1996).


It’s frankly criminal that the Donahue canon is so hard to get a hold of. We don’t know if any Blu-Ray releasing companies read this site, but if so, how about a Sean Donahue Collection set that could include this, Blood Hands, Parole Violators and the rare Ground Rules (1997)? It could introduce these wonderful and little-seen movies to new audiences. We’re also available to do commentary tracks, should that be a bonus feature, by the way.

In the meantime, head over to YouTube and watch “Roughcut” – a great time will be had by all.

This movie was awesome. Richard Lynch delivered as a bad boss as always. And that fight scene at the restaurant. Great review as always! Now I have to revisit parole violators.

Thanks for the kind words! You're right, everyone should revisit Parole Violators!

Splendid write up! I plan to review this title myself at some point in the near future. I have greatly enjoyed visiting your blog over the years!

Thanks! Appreciate your support. You'll enjoy watching and reviewing this classic!