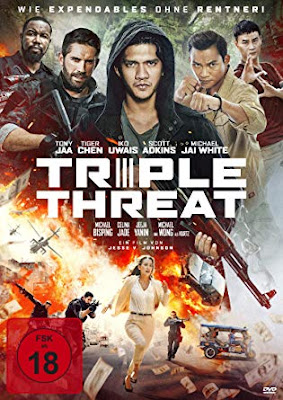 Xian (Jade) is a wealthy woman who uses her money to put forth an initiative to clean up the communities around her. You wouldn't think this would be such a bad thing, but it really upsets the local baddies. Part of her clean-up plan involves getting rid of the local gangsters. So the evil Collins (Adkins) and Devereaux (White), along with their legion of evildoers, set out to kidnap Xian, and it appears no one can stand in their way.

That is, until our heroes Payu (Jaa), Jaka (Uwais), and Long Fei (Chen) show up on the scene. They end up protecting Xian and fighting the bad guys tooth and nail. Naturally, that leads to a lot of shooting and fighting. Who will survive the TRIPLE THREAT?

We know what you're thinking and the answer is no, Triple Threat is not the long-awaited biopic of Harvey Fierstein. We all know he can sing, dance, and act. Until such time as that potential blockbuster is unleashed on the public, however, we have the movie at hand today, which is an entertaining and worthwhile beat-em-up. Strangely, it doesn't quite reach the electrifying heights its superb cast would seem to indicate.

Putting fan favorites Scott Adkins, Michael Jai White, Tony Jaa, Iko Uwais, and Tiger Chen all in one film together is pretty much the action fan's dream cast in 2019. While it's certainly not a case of Lone Tiger Effect (which, for those who are new to the site, is what we call it when a stellar cast is assembled but the movie itself is a dud), because the film is far too good for that, somehow it feels like some ingredients are missing. And we think we know what they are. 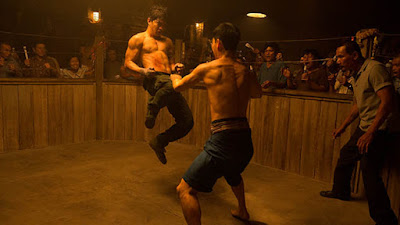 But before we reveal what we think that might be, let's talk about what works in Triple Threat. First, and most obvious, is the Martial Arts fighting. It's stupendous and our superstar cast really 'brings it'. Perhaps they felt a bit of friendly competition with each other, but everyone brings their A game, and each has their own unique style.

It was a treat to watch the Jaa-Adkins fight, and the Jaa-Iko-Adkins brawl was manna from action heaven. We appreciate all the work that goes into such scenes. Without listing each and every fight, let's just say that, even more so than the gun-shooting scenes, these combat sections are movie highlights. But that being said, the whole thing is quite violent and has a high kill count.

With that in mind, Triple Threat certainly aims to please, as it starts off as your classic jungle shoot-em-up, complete with exploding huts. Then it moves to a scene of Punchfighting. Then it settles into its urban action scenario. So it seems that fans are being very well served with a bunch of familiar settings they'd be used to from action movies past. Overall it's shot very well and feels professional.

We also felt it was different to have not just Adkins as a baddie, but also Michael Jai White as one as well. Both men are primarily known as heroes, so it was unusual to have not just one of them playing against type, but two. We liked that as a change of pace.

But, as promised, here's what we felt could have been improved. Not very surprisingly, it was the plot and characterizations. The former was minimal, and the latter was nil. As action fans, this is not new to us, and we're all very used to this, I'm sure.

But what would have knocked Triple Threat out of the park as a complete and satisfying whole would have been a compelling plotline with characters you really get to know and care about. Not that you don't care about our heroes, but you know what we mean. A little more detail or perhaps a little bit of emotion would have gone a long way. 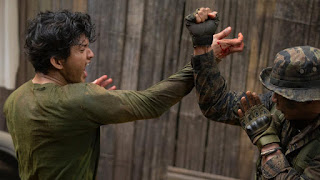 But that's our only real gripe with Triple Threat. Otherwise, it's a top-notch example of modern-day action. We couldn't be happier that movies like this are still being made. We say keep 'em coming. So, while the absence of more formal plot and character elements may keep the audience from totally engaging, as an exercise in action violence, Triple Threat is recommended.

Comeuppance Review by: Brett and Ty
Also check out write-ups from our buddies, DTVC and The Video Vacuum!
Posted by Ty at 28.12.20