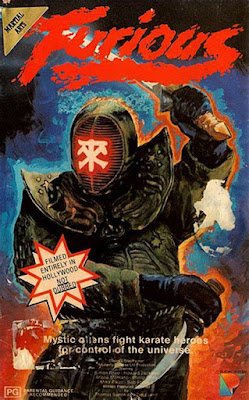 An attempt at a plot description for Furious would be like trying to describe the plot of Eraserhead (1977), or Begotten (1990), or some other piece of impressionistic, surrealistic cinema. It's not impossible, per se, but it won't really convey what you see on screen. You just have to watch it for yourself.

The tagline for the DVD (which is out of print and expensive) is "Karate Heroes Fight Aliens For Control of the Astral Plane!" And, yes, Simon Rhee, playing a young Martial Artist named Simon, in some way, manner, or form, battles it out with many strange assailants, including Master Chan (Phillip Rhee). But what happens along the way simply must be seen. Mere words can't do it justice.

Furious is the netherworld between a dream, a drug trip, and a student film. There's very minimal dialogue, there's magic, there's chickens, there's a swordsman entertaining patrons of a restaurant, there's a Devo-esque band playing, there's an evil corporation and angry sherpas, there's a Karate school of children, and a heck of a lot more besides. We wouldn't dare spoil anything you're about to see. 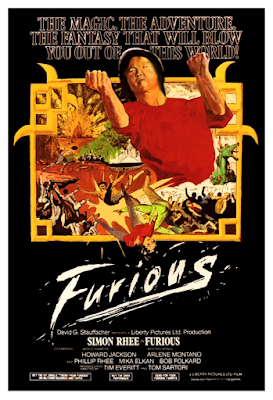 We're not sure how much of this is intentional and how much is unintentional, but at the end of the day, it doesn't matter. It's certainly unexplainable. It's wacky and you never know what directors Everitt and Sartori are going to throw at you next. Fun, entertainment, and smiles follow.

Furious is a classic of the VHS era. It made going to the video store in the 80's worth doing. You might think, if you didn't know any better, that this was just a run-of-the-mill, standard Martial Arts film. Nothing could be further from the truth. If someone took a chance on renting Furious back then, they would've been hit with something unexpected. Getting rewarded with something so left-field fueled the addiction to video stores. But the power of Furious continues into the present day.

Consequently, Furious is one of the best films we've seen this year. I'm sure we'll be talking about it and referencing it from now until kingdom come. Only one question remains: Where's the Blu-Ray?

Email ThisBlogThis!Share to TwitterShare to FacebookShare to Pinterest
Labels: 1984, 3 and a half stars, Furious, Phillip Rhee, Tim Everett, Tom Satori