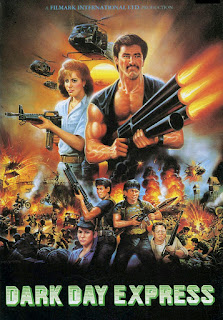 
A group of adventurers is formed in true “Assemble a Team” fashion: Dr. Raymond is a man who looks like a cross between Sammo Hung and James Earl Jones, and he gets the ball rolling. They find a tough American guy named Tony (Kluppel), a mulleted Punchfighter named Samuel, a wacky girl-guide named Pam, a jean jacket-wearing ruffian named Patrick, and a worldly-wise woman named Pauline, and they all trek out into the Thai jungle to recover a lost relic.

They’re promised two million dollars each if they can find it, but it’s not going to be easy. Not only do they have to deal with the pitfalls of the jungle and interpersonal differences, it seems everyone in Thailand with a machine gun is after them as well. Will it be a DARK DAY for our expedition, or will our MISSION HUNTERs find their…mission? Find out if you dare!

Dark Day Express is an enjoyable jungle-blow-em-up-guard-tower-fall-exploding-hut-machine-gun shooter…with a difference! With confidence I can compare it to the classic slasher Final Exam (1981), because in that film, for the most part, for the first hour we get to know the characters, and in the last section, the slashing starts.

While Dark Day Express will never be remembered for its character development, what it does well is keeping its powder dry until the showstopping final third. We then see a half-hour-long climax of blow-ups, Martial Arts, shooting, and motorbike stunts. If you’re not really feeling it for the first hour, hold on. We’re about to reach Commander (1988)-level awesomeness.

There’s the classic dubbing we all love and enjoy, and the whole outing has that “third-world charm” we often speak of. It was clearly designed to please the Asian audiences of the day (there doesn’t seem to have been much of a push for more viewership outside of that part of the world), and presumably that includes some of our hated bathroom humor. That aside, characters yell while they shoot machine guns, and, especially in the last section, the action quotient is fairly well off the charts.

Usually in the big finale, there’s either a Martial Arts battle or a series of shootouts or some blow-ups. Here, quite unusually, we get all three at once! We cut back from one to the other to the other. It deserves credit for that alone. Further enhancing the “it’s foreign to us!” vibe is the music by Thoodore Green. No, that’s not a typo. At least not by us. There’s a guy credited as Thoodore who made the music, which was great, by the way, including a copyright infringement-defying crib of John Carpenter’s Halloween theme at one point.

What’s more, other names in the credits include director Lewis Peacock – if that is his real name – and other people with the last names of Plum and Mustard. Did they just open a box of Clue to get their anglicized names? And do they think those are normal, common names for Americans or Brits to have?

Nevertheless, it’s a shame this is the only credited effort for director Peacock. He could have, and should have, gone on to do more. If he can show his ability to blow up a hut or two with his debut, imagine what could have come later? But we’re lucky we got what we got.

Dark Day Express is a blow-em-up gem that will surely please fans of that subgenre of action known as the jungle-based Exploding-Hutter (such as ourselves, and probably you). The golden year of 1989 has given us yet another winner, and the film deserves to be more widely seen and appreciated.