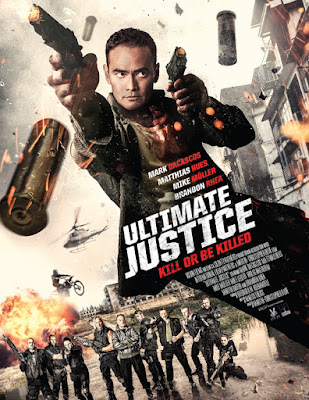 
Gustav-Ferdinand Von Behren (Dacascos) – his friends call him Gus – is the leader of VME, a team of highly-skilled A-Team types who execute dangerous missions and fight the baddies. After a mission goes wrong, the team splits up and they all go their separate ways. However, the owner of VME, Hans (Riehm) has his own problems.

When his wife is attacked and his daughter kidnapped, that’s enough impetus for Gus to get the old team back together. Kicking into high gear, Gus re-teams with Andreas (Rhea), Radowsky (Hues), Benny (Moller), and other members. After some twists and turns, we finally find out who is on the receiving end of the ULTIMATE JUSTICE.

We really liked Ultimate Justice. First-time director Martin Christopher Bode really seems to know what fans want and he delivers it. We couldn’t be happier that there are still people out there making “Assemble a Team” movies, and the inclusion of fan favorites Dacascos and Hues only sweetens the deal. We enjoyed all the really cool fights and the German backdrop provides a nice setting. You can tell they really cared and that was infectious.

Yes, unfortunately there is some CGI as it relates to the bullet hits, muzzle flashes and such, and if that wasn’t there, it would rank even higher in our eyes. It just wasn’t needed in this tribute to old-school action. That’s really our only complaint – although some people may find the unintentionally humorous dubbing off-putting. We thought it just added to the throwback feel that we’re used to. Plus it provides a couple of laffs. 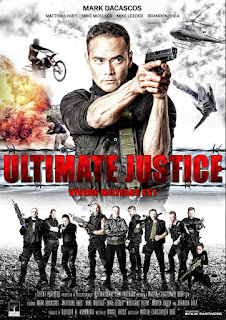 Bode opts to let us get to know the characters a bit more than what we usually see, so that was appreciated. But, of course, there’s plenty of gun-shooting and Martial Arts action. Naturally, the Prerequisite Torture is here too (and, unrelated to that, we get to see the world’s fastest neck snap). Mike Moller – not to be confused with Matt Mullins - stands out as an impressive fighter and we look forward to seeing what he does in the future.

Striking a nice balance between the more serious-minded and the silly, Ultimate Justice delivers the goods for action fans in this modern era of DTV.


Comeuppance Review by: Brett and Ty
Also check out write-ups from our buddies, DTVC and Bulletproof Action!
Posted by Ty at 30.11.20