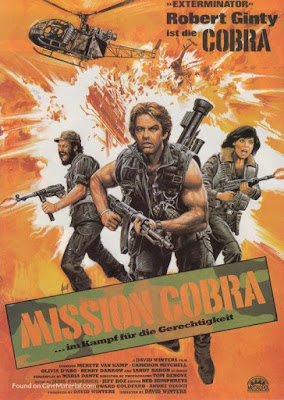 Cooper (Ginty) was a demolitions expert in 'Nam. He parlayed that into a career of blowing stuff up after returning home. When he meets up with his buddy, an older fellow Marine named Harry (Cam), at the Little Nashville Club to take in some ladies oil wrestling, Harry tells him he's running guns to the rebels in the South American country of Santa Maria. Harry, filled with a sense of patriotic pride (although what that has to do with the people of Santa Maria I'm not exactly sure), in his enthusiasm convinces the reluctant Cooper to come with him on one of his gun runs south of the border.

The two men hop into Harry's big rig, named Harry's Dream Machine, and they eventually reach their destination. However, much trouble follows as the baddies proceed to ambush them and Harry goes to the big oil wrestling ring in the sky.

So Cooper figures the best way to get revenge is to join the rebels and slaughter as many of El Presidente's goons as he can. Thanks to an embedded wartime journalist named Bingo Thomas (Baron - unforgettable to Seinfeld fans as the irascible Jack Klompus), Cooper becomes an inadvertent media celebrity and the fight against El Presidente Ariban (Rojas) and the entrenched bureaucracy represented by Senor Borghini (Darrow) escalates to much bigger proportions than the rebels ever imagined before Cooper's arrival. But what about Sydney Borghini (Van Kamp)? Where do her true allegiances lie? You'll find out if you accept the mission that Ginty accepted: MISSION KILL.

In the 80's, there was a lot in the news about the turmoil in certain South American countries such as El Salvador and Nicaragua. While not South American, the incident on Grenada captured the public's attention as well. And, with the possible help of Stripes (1981), there was a renewed national fasciation with oil wrestling. With this context in mind, we have Mission Kill, yet another addition to the seemingly-endless El Presidente Boom of the 80's. Not just ninjas had a Boom back then, let's not forget. 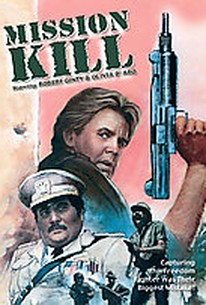 Mission Kill falls in with compatriots such as Cocaine Wars (1985) and Hour of the Assassin (1987). It's not particularly distinguished but it's not awful. It does have fan favorites Ginty and Cam, after all. Nothing with them could ever be a total disaster. But a better example of their pairing is another Winters film, Code Name: Vengeance (1987). In that case they're in Africa, not South America. But, you know, six of one, half a dozen of the other.

Despite some slow passages, we do get a healthy amount of shooting and blow-ups. The score has some very nice synthy moments underpinning it all. A brief exploding helicopter is also present and accounted for. We liked the plot device of Ginty being a demolitions expert: it gave a reason for the explosions (though one is never really needed, of course). He blew in Vietnam, and he blows today. 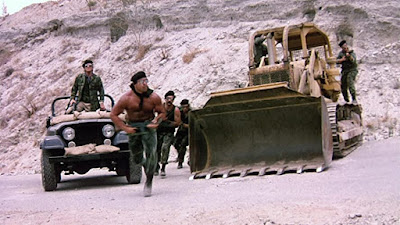 Naturally, preceding all of this is an on-screen quote by William Faulkner from his 1950 Nobel Prize speech. Of course there is.

Featuring the catchy and memorable end credits song "Stand" by Jesse Frederick - which absolutely should have been used at about the mid-way point in the movie during a training sequence in order to pump things up but unfortunately isn't - Mission Kill can certainly be categorized as one of the El Presidente movies that took up video store shelf space in the 80's. It's not in any way bad, but it needed more focus and drive. If choosing between this and Code Name: Vengeance, pick Code Name: Vengeance. It's sillier and a bit more fun.

Mission Kill and Codename Vengeance are two of Ginty’s best. David Winters seemed to make a career in this type of movies. He directed both the aforementioned, and also the similar Rage To Kill with James Ryan.

If there's not a category in the annals of filmdom referenced as "Presidentesploitation," then I don't even know what we're doing.

Roger: Out On Bail is also a good Ginty. Check it out when you can!

Zombo: It is a category unto itself. There are lots of examples, like Cocaine Wars and Hour Of The Assassin to name just a few.