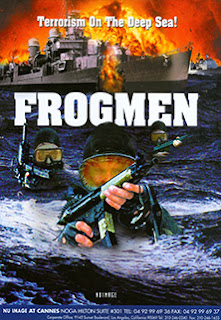 Directed by: Franklin A. Vallette

Rick (Christopher) is the leader of a SEAL team in Albania. He and the rest of his crew have to take along a mysterious man named Andreas (Mitchum) with them as a guide. But what is Andreas’s real purpose for being involved with the mission? After a lot of shooting and blow-ups, we finally get to the truth…but what will be the real cost to these FROGMEN?

U.S. SEALS 3 is very standard fare. It doesn’t have the unusual plot turnaround of the first outing, or the energy and entertainment of the Isaac Florentine-directed second installment. It’s just kinda there. It’s not bad, per se, but it does get quite boring and is fairly typical Nu-Image muck. It could’ve used a name, any name, to pep things up…Tom Sizemore, Jay Roberts, Jr., Kellan Lutz…somebody.

Probably because we’re dealing with Navy SEALS, there are plenty of underwater scenes and it does bring something new to the table: underwater grunting. You haven’t heard grunting until you’ve heard underwater grunting. Granted, the characters involved probably wouldn’t have heard themselves grunt, but, in the pioneering spirit of the film, we, the audience, get to hear this sonic marvel. Also there’s a classic “NOOOOOOoooo!!!”, as we frequently hear, but, you guessed it: It’s underwater this time. Pretty sweet. I guess.

As is often the case with these military-based outings, much-needed character development is thrown by the wayside. Adding insult to injury, a lot of the characters, especially the SEAL team, look a lot alike. So it’s hard to tell – or care – who is speaking or what’s really going on. But there is a lot of silly and nonthreatening violence papered over it all. Additionally, when they were trying to explain where they were, they misspelled “Aegean” on the screen. Where was the quality control?

In 1994, before his murder troubles, O.J. Simpson was set to star in a series called Frogmen. Also, Deep Purple has an album called Stormbringer. No doubt inspired by these series of events, Nu-Image concocted this, U.S. Seals 3 AKA Frogmen Operation Stormbringer. It’s a 90-minute film released in 2002. It probably runs at 24 frames per second. You can watch it on a screen. We think that pretty much covers all there is to say.

We were not moved in one direction or another by this film. We didn’t love it, and it’s not nearly bad enough to hate. It simply exists in our world, like rocks and trees and mountains and sand. If that sounds like a ringing endorsement, you can watch it on Amazon Prime. But we think you may have better things to do.

i rather enjoyed this one, the Seals films are right up my alley.

We liked the 2nd one a lot!