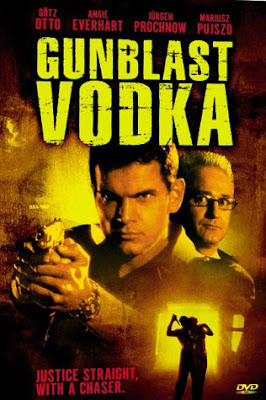 There's an evil Russian baddie on the loose (what else is new?)! In this case, his name is Sacha Roublev (Prochnow) and he's operating a snuff film factory out of Wroclaw, Poland. He's kidnapping girls left and right and forcing them to "perform" in said films. The local Polish cops, including a wild n' wacky guy named Marek...uh...Brzeczyszczykiewicz (thank goodness for cut and paste) (Pujszo) are on Roublev's trail, but they need help. So, naturally, they turn to the one man that can really nail Roublev to the wall: Abel Rothstein (Otto).

Rothstein is a Tel Aviv-born badass who was in Mossad and the Israeli army. He's a tough, no-nonsense dude, and he and Marek are, well, the original odd couple as they tramp their way through Poland trying to put an end to their (snuff) film industry. One of Rothstein's motivating factors is that Roublev really crossed the line when he kidnapped an American woman named Jane Woods (Everhart) who looks exactly like his lost love from back in Israel. Will Marek and Rothstein be triumphant? And who will discover the true meaning of the phrase GUNBLAST VODKA?

If Nothing Underneath (1985) met Taken (2008) in a dark alley at night, had a cameraman that was zonked out on crystal meth, and had a post-dubber who was deaf, you might come out with something like Gunblast Vodka. Now, while we didn't think the movie overall was quite as "bad" as everyone seems to think it is, let's be honest. It has some flaws. The frantic antics get tiresome after a while, and the camerawork and editing could be quite headache-inducing. Like a lot of films of this type, it starts to flag around the hour mark. But in this case it reaches a strange mixture of hyper and tired that you don't see too often. And it could have used better lighting.

All that being said, the silly-voiced dubbing provides some entertainment, and the outing as a whole is certainly off-kilter. All the best parts of the film are the ones involving Gotz Otto. Not that that really needs to be said, but let's get it on the record. The movie would have benefitted by having less self-consciously "wacky" scenes and more scenes of Otto beating up and/or shooting people. Otto really does show his range as an actor here, believe it or not, because in Schindler's List (1993) he was an SS guard. Here, he's an orthodox Jew. Otto deserves better material than this, it must be said, but his presence does elevate things a lot.

Sure, the whole thing is unusual and non-traditional (or just "off") but it should get some credit for predating the aforementioned Taken. Rich guys were bidding electronically on the girls who were kidnapped, and Angie Everhart was "Taken". Of course, Prochnow was the baddie as he usually is. For a night of "fish out of water cop in Poland" movies, pair this with Beyond Forgiveness (1994).


While we didn't think Gunblast Vodka was quite as bad as some people say it is, we can kind of see where they're coming from. However, we choose to see the positive: unconventional movie structure, Gotz Otto, and some tasteless humor. Should you run to your local DVD seller or computer and purchase it right away? No, probably not, but if you see it for a dollar at the gas station, you could do a heck of a lot worse.
Comeuppance Review by: Brett and Ty

A very fair appraisal. I've got this in my collection and it's certainly an oddity. I mainly bought this for the cast, but later I developed a particular fascination with Polish genre films and have kept it for that reason. Of the many I've seen, none is quite as distinctive as this one. I just wish it was better.

We definitely agree. Check out Beyond Forgiveness or Sacred Cargo for more Polish action (both are reviewed on the site if you want to check it out).

BEYOND FORGIVENESS I've always wanted to see and I'm kicking myself for not watching recently when it briefly turned up on Prime here in the UK. It's very hard to find and it soon vanished. I recommend you look out for the Polish productions FATHER'S LAW / PRAWO OCJA [2000] and SARA (1997), both of which riff on American action style. SACRED CARGO was Russian, one of the 'Kremlin Films' productions, along with MIRROR WARS and RED SERPENT, all of which are curios, but not really good.