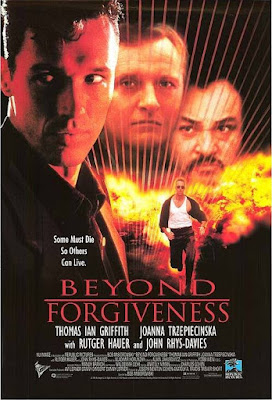 AKA: Blood Of The Innocent

Frank Wusharsky (TIG) is a Polish-American cop in Chicago. A festive evening of eating kielbasa and dancing to polka turns to tragedy when some baddies gun down his brother. Searching for answers as to who the evildoers are, Frank travels to his family's homeland - Poland, of course. Now a fish out of water, Frank finds an ally in lovable Polish cop Shmuda (Rhys-Davies).

He meets resistance both from the official authorities and the Russian gangsters that are running wild all over Poland, but he does get further help from Anna (Trzepiecinska) - which leads him to the nefarious Dr. Lem (Hauer). Will it be a conspiracy that goes all the way to the top? Perhaps involving, in some way, the medical profession? Maybe you were B.O.R.N. to find out!

Beyond Forgiveness (AKA Blood of the Innocent) is one of the better TIG movies we've seen to date. It's certainly a heck of a lot better than Ulterior Motives (1992). But it's hard to beat the classic Excessive Force (1993). All in all, it's arguably number two in the TIG rundown.

That's because it has a lot of good things going for it. It's got a very enjoyable - dare we say classic - plot of a cop out for revenge and unafraid to shoot/kick/punch anyone who stands in his way, it's got more than a handful of cool lines said by TIG, and, even though this was a Nu-Image production, the whole thing was actually shot in Poland (and not Bulgaria) and has some very nice locations. 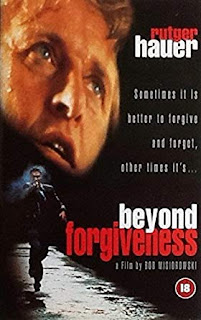 Additionally, there are some quality blow-ups, shootouts, and fight scenes. Griffith is backed up with some top-notch talent this time around with not just Rhys-Davies, who also has some great lines and is charismatic and you grow to really like him, but also Rutger Hauer is here too, don't forget. His presence is enough to reassure audiences that we're watching something of substance.

Trzepiecinska was more than just the eye candy - she gets in on the action and helps things along. This was one of her only (if not her only) non-completely Polish-made/Polish-language productions. She should have been in more.

It's a little surprising that this was directed by Bob Misiorowski, who we only know from two of his other duds, Blink of an Eye (1992) with Michael Pare, and Derailed (2002) with Van Damme. Beyond Forgiveness is leaps and bounds better than those two. Clearly Misiorowski was in his element here and it's definitely the best thing we've seen from him to date. 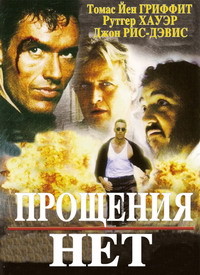 Of course, it helps that there's a classic vegetable cart blow-up and there's sax on the soundtrack. That, and Griffith beats up some Polish meat factory workers. Obviously they want to kill him (?) - talk about not wanting to see how the sausage is made!

Beyond Forgiveness combines a solid revenge plot, nice locations, and quality actors. It even features what you might call a more mature TIG. We really enjoyed it.

This is a very underrated, one could even say forgotten, movie. I agree that it is TIG’s second best.

Totally agree! More people should know about this movie.

This is high on my must see list. Very hard to see here in the UK. I missed a chance to see it when it surfaced briefly on Prime Video. Very interested in Polish action films / co-productions and this was one of, if not the, first.

Definite worth a watch. Interesting that is hard to procure in the UK, hope you find it soon. If you're looking for Polish actioners you'll enjoy it.