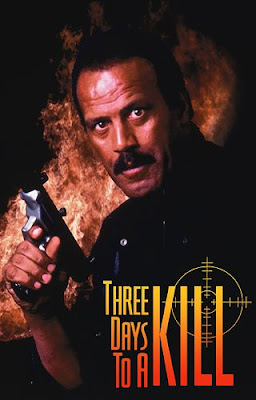 
When Ambassador Barnes (Brown) is kidnapped by a Colombian drug lord named Perez (Silva) and his sidekick Pepe (Landham), Captain Wright (Connors) calls a man named Cal (Williamson). Why did he call Cal? Because Cal is "The Best", of course. Tasked with going to Colombia to rescue the ambassador, Cal enlists the help of Rick Masters (Svenson), an explosives expert.

It just so happens that Rick is in prison, but Cal promises him an early release, along with some bonus cash, if he can help execute the mission. The last member of the team arrives in the form of Yolanda (Dakour), a military contact masquerading as a stripper. While dealing with the troublemaking Rick Masters is going to be a handful, Cal and Yolanda forge ahead. Naturally, there are many pitfalls (i.e. shootouts) along the way, and maybe a conspiracy or two that will go all the way to...well, you know where. Will our trio save the ambassador? Or will it be THREE DAYS TO A KILL...for him?

Three Days To A Kill (which sounds a bit like a Seagal title, don't you think?) is a film of firsts and lasts. It was Van Johnson's last feature film, Chuck Connors's last feature film, the first - and last - Fred Williamson made-for-HBO film, and, perhaps most importantly, it's both the first and last production of Snizzlefritz Productions. When we first started this site, we made a vow to see every Snizzlefritz production. And now we have. 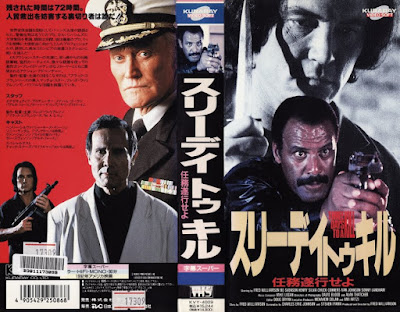 With that triumph under our belts, we can now talk about the film itself. As we never tire of saying, Fred Williamson is one cool customer. Everything he does, says, and wears is just cool. He has a lot of charisma and it's a joy to watch him onscreen. When he's paired with Bo Svenson - who has his own unique brand of charisma - they make a great team. An original odd couple, you might say.

While 'Three Days gets off to a bang-up start - with fan-favorite Connors using a smaller weapon than most viewers are used to seeing him with; he went from being the Rifleman to being the Pistolman - it does tend to lose steam in many spots. There will be a shootout or some sort of action scene, and then it'll settle back down.

The proceedings get a huge shot in the arm when the characters of Slick (Joyner) and his associate Godzilla (Rochelle) show up. These two almost singlehandedly (if it's possible for two people to do something singlehandedly) steal the movie. Heck, they should have gotten their own movie! To think that they stole the show when classic/veteran actors like Connors, Johnson, Williamson, Silva, Landham and Svenson are all here is truly saying something. 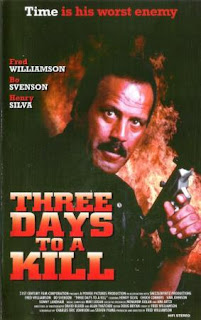 The cast is clearly a strong one, but the material surrounding them is not befitting of their talents. Sure, the Van Johnson role is of the sit-down variety, but in this case it's understandable as he passed away shortly thereafter. While Johnson did indeed go to that big Priority Red One in the sky, his co-star from that outing, Fred Williamson, carried on. He inevitably faces off against Silva, forever a baddie, and Landham, who really does the evil underling role with gusto this time around.

Of course, someone says "We got company!" and it's rather obvious that the whole thing is just a made-for-cable version of 48 Hrs. (1982) but with the races reversed. It's all just entertaining enough - especially if you're a fan of any of the personalities involved - but there are definitely some dead spots (or at least slower spots) along the way.

At the very least, it's a one-time watch. It's not bad, it's not great, but Three Days To A Kill has one thing that literally no other movie in existence has. In a word: Snizzlefritz.