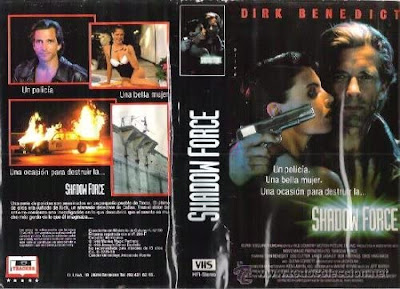 Something rotten is going on in Norman, Texas. Not only is the entire police force corrupt, but they're also on the payroll as assassins for local crime lord Emilio Vela (Pena). Chief Thorpe (LeGault), who looks a lot like Craig T. Nelson, knows about it. Mayor Talbert (Hastings), who looks a lot like Mike Ditka, knows about it. The whole freakin' town knows about it. So when out-of-towner Rick Kelly (Benedict) comes to Norman to start investigating his brother-in-law's murder, all the forces in town ally against him. He teams up with your standard female reporter, Mary (Cutter), and the two of them proceed to unravel the conspiracy that goes, well, all the way to the top. But will they be able to put a stop not just to the police force, but to the SHADOW FORCE?

Shadow Force is a DTV cop drama with some action elements. It's relatively serious in its intentions, and not wacky. That's not to say there isn't humor, but it's either unintentional or it's provided by the charming Dirk Benedict. He keeps the movie afloat, along with some amusing side characters like Tommy the bartender (Elam). Lise Cutter as the love interest/reporter should've done more, or at least have had a more flattering hairstyle. It all plays out like a TV movie, possibly made for Lifetime, which isn't surprising as this was director Lamkin's only theatrical film, having primarily worked in television. You can definitely tell.

It's sort of a DTV version of Magnum Force (1973). On the technical end, it's all lit and shot well enough. There's the local color of something like One Man War (1990). Or, if you're being particularly uncharitable, Radical Jack (2000). There are some car stunts, a blow-up or two, and a bit of shooting, but the movie highlight comes when Rick Kelly breaks out the skills he learned in 'Nam and sets some Home Alone-esque traps for the baddies. In other words, deadly ones.

Benedict really was the Bradley Cooper of his day, which explains why Cooper played Face in the recent A-Team remake. That was good casting. Someone was paying attention. On the soundtrack front, during most of the scenes of action or intrigue, Jeff Marsh provides some wailing quasi-shredding on electric guitar.
Whenever the Mexican baddie Vela appears on screen, a Mariachi-styled nylon-string acoustic guitar is strummed. We're not going to say that's racist or anything, but let's just say we wouldn't be surprised if there was an Asian character and a gong was hit every time he was on screen. For the end credits tune, a very catchy ballad called "We Can't Lose" by Marsh and Carol Michaels plays. It will likely get stuck in your head. It could've been a hit on adult contemporary radio at the time.

Of note is the fact that the Imperial Video VHS states that the running time is 97 minutes. The moment we first see the end credits, the movie clocks in at 77 minutes. A very TV-esque running time. There are also trailers on the tape, including for My Samurai (1992) and other Imperial titles, so lying and inflating the running time by 20 minutes was not necessary. But that was how it was back in the VHS days. We're just beginning to sort it all out now. That's especially true in this case, as Shadow Force doesn't appear to have been a hot renter on the shelves. From what we've been able to tell, it likely just sat on those shelves and collected dust.

Sure, it's a little slow by today's standards, and there's nothing particularly exceptional about it, but it's not bad. If more of the movie had concentrated on Dirk Benedict killing off baddies using his 'Nam skills, and it had backed off of some of the other, more boring material, we'd have a true winner on our hands. As it is, it's all a bit middle of the road. But Benedict fans may want to check it out.