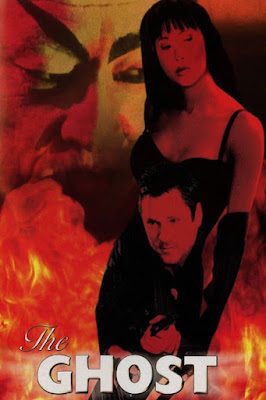 
Jing (Lee) is an assassin for the Tongs who is so elusive, she's known as "The Ghost". After she gets on the wrong side of evil baddie Chang (Tagawa), he vows to hunt her down and kill her. She makes that much harder for him by flying from Hong Kong to Los Angeles so she can pose as the Asian mail-order bride to a man named Edward Cosgrove (Hatch). While initially the relationship between the two is just for her cover, she gradually begins to genuinely fall for the good-natured Edward.

Meanwhile, an underling for Chang, Inspector Wu (Chan), and a bunch of his heavies, follow Jing to L.A. But because they don't know where she is, they end up at the doorstep of one Daniel Olinghouse (Madsen), of Olinghouse Bail Bonds. Olinghouse and a Lt. Garland (Dourif) of the LAPD have a working relationship despite some past troubles, and the men are tasked by Chang and Wu to find Jing.

But it comes at an ever-increasing price. Olinghouse's bail bondsmen Browner (Herthum) and Sink (Hunt) may be masters of disguise, but it's going to take all the ingenuity of Olinghouse to finally track down the crafty Jing. Will anyone finally bust THE GHOST?

Yes, The Ghost is stupid and dumb and all that, but thankfully it's the GOOD kind of stupid and dumb. It's all very enjoyable and entertaining - far more so than you'd think it might be. Of course, there are the standard low-budget pitfalls: a cheap overall look, rough edits, amateurish acting, questionable fight choreography, and the like, but somehow, against all odds, it manages to win you over. You have to love it. It only adds to the viewing experience. 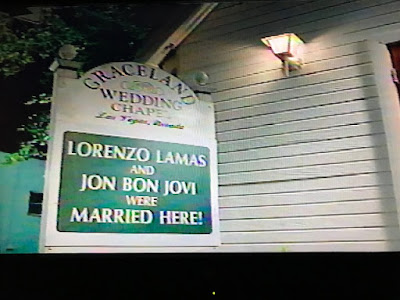 If you like awkward dialogue delivered awkwardly amidst awkward stagings, The Ghost is the movie for you. It easily could have been another dud like Double Deception (2001), but it manages to sidestep that by having a silly charm all its own.

The solid cast and 85-minute running time also help a lot. First off, we have Julie Lee as The Ghost. Her character does go through an important arc: she starts off as an Asian Minnie Driver, but she ends up as an Asian Anjelica Huston. We really grew to love her flat-as-a-board line readings in her husky (some wags might say "mannish") voice. Especially in her "beating up MAP's (Middle-Aged Punks)" scene, she was reminiscent of Tiana Alexandra going undercover as "Cinderella Pu" in Catch the Heat (1987). She was good in her Martial Arts fight scenes, but it's hard not to be upstaged by Henry Smalls as Henry.

The Ghost, as a film in total, needed more Henry! His character was unquestionably the movie's highlight. Any time he was on screen, we shouted "Yes!" We loved him, and we should have seen more of him. 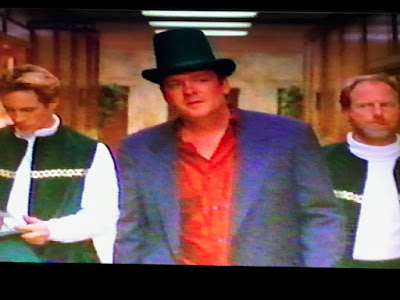 Of course, there's plenty of Michael Madsen here for us all to enjoy. He brings his classic charisma, gravelly voice, and fantastic fashion choices to the fore. He's sort of the nucleus of the film and what we see revolves around him. The scenes between Madsen and Brad Dourif showcase an "odd couple" vibe that's fun to watch. Tagawa plays - you guessed it - a bad guy, just as he's done in every role in his career. We'd love to see something where he plays the good guy. But it seems he was typecast just because he looks evil. It's a shame.

On the other end of that spectrum, Richard Hatch plays the innocent guy caught up in all this, not to mention the romantic male lead, and honestly it's probably the best Hatch we've seen to date. 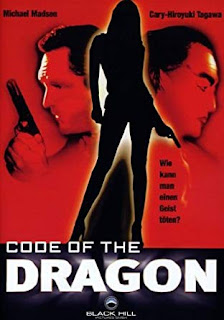 B-Movie mainstays such as Al Leong, George Cheung, and James Hong, among others, round out the cast. The whole outing is amusing and funny. Maybe you have to have a sense of humor to enjoy The Ghost, which it seems not everybody does.

The early 00's were not the best time for movies, so that means that The Ghost is probably the best movie of 2001 by default. For B-Movie DTV denizens such as ourselves, it's well worth seeking out.

Great review. Makes me want to see it again. I remember being about disappointed by the lead, but the fight scene with the guy with no legs is one of the most unforgettable moments on film. At least it was for me.

We agree, Henry was a movie highlight! Worth a re-watch.