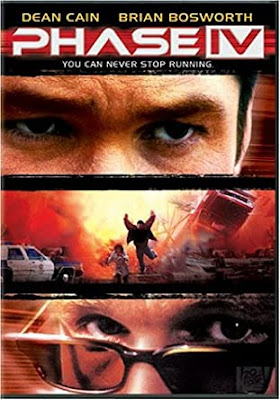 Simon Tate (Cain) is a former Navy SEAL and football player who, at the age of 30, decides to enroll himself at New England University with the aim of getting a degree in journalism. But Simon Tate gets more than he bargained for when he accidentally stumbles upon a conspiracy that threatens many people's lives. Noticing a pattern among the mysterious deaths of some students of NEU (which is not to be confused with the German Krautrock band of the same name), he reaches out to Dr. Ben Roanic (Coats) for some possible answers. However, it seems Roanic knows too much about the mysterious "Phases" that a company called Stroyker Pharmaceuticals desperately wants covered up - at all costs.

Enter a team of goons and thugs headed by the scary Steven Birnam (The Boz). They're more than willing to silence anyone when it comes to Phases II-IV. When Tate gets too close to the truth, and it involves Senators and Senatorial candidates, the head of Stroyker, Karl Dean (Donat) demands that Tate be eliminated. His goons then kidnap Tate's wife Carla (Mathieson) and his young daughter Kaitlyn (Sampson), which leads to the ultimate showdown. Will we ever discover what's so important about...PHASE IV?

Not to be confused with the killer ant movie of the same name from 1974, this particular Phase IV offers up its own brand of enjoyment. There's a lot to love about Phase IV. It somehow manages to combine extreme silliness with a plot that's actually really good. The conspiracy at issue here is genuinely involving, and the film overall makes some very valid points about society. We don't want to give too much away, of course, but let's just say there's some real meat on the bone here and it's not your run of the mill empty-headed action. The filmmakers have a point to make, and they make it well. 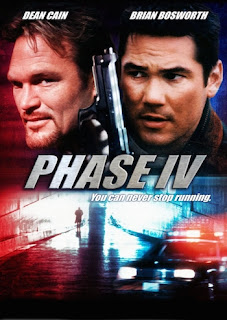 On top of that, we get some really entertaining action sequences, and two fan favorites in Boz and Dean Cain. Phase IV really features the Dean Cain we all want to see. He's likable, he's beating people up, and he really gets in on the action. He doesn't pull any punches this time. He fires off some classic wisecracks as the icing on the cake. The idea that the former Navy SEAL is not your classic news reporter that we often see, but is a journalism student on the campus newspaper was an off-kilter choice that we really liked. The backyard fight with Cain and the goons was a movie highlight, but all the action scenes and blow-ups were fun to watch.

As soon as the film starts, we're immediately thrown into the action as our goons are chasing down a very agitated man. This sets the tone of action, conspiracy, and humor pitch-perfectly, and it doesn't deviate for the rest of the film's running time. Normally we'd balk at 100 minutes, but this time around it's painless because it's pretty well justified. In that opening scene we're "treated" to some CGI snow and water, and we thought "uh oh". But hang in there and you'll see some massive improvements from there on in. Why they thought they needed CGI snow in the beginning, but nowhere else, remains a mystery. Much like the mystery behind Phase IV itself. 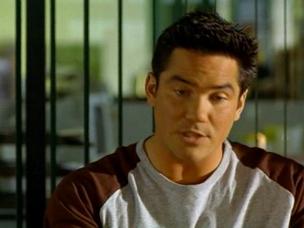 It seems worth noting that the gaffer on the film was a dude named Dan "Bran Muffin" Grady. He seems like a cool guy that you'd want as your pal. Maybe if we lived in Halifax, Nova Scotia, where Phase IV was shot, he would be. I bet the people are friendly there.

While it may seem improbable, we really loved Phase IV. All the ingredients really came together this time around. As of this writing, it's on Amazon Prime, so feel free to go check it out.