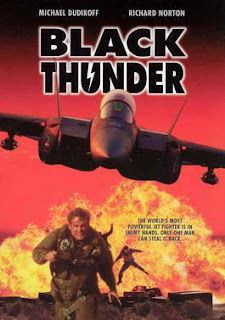 A man named Vince Conners (Dudikoff) is "The Best". Because he's a test pilot (and also the best), he is tasked with retrieving a stolen plane from the evil Libyans. But it's not just any plane. This one is so stealthy, it can actually disappear from the human eye. It's called the Nova (which is Spanish for "it doesn't go", which is why Chevy didn't sell many in Spanish-language countries). So he ventures into enemy territory with his partner Jannick (Hudson). When Jannick is captured, held hostage, and tortured, Vince has to go it alone. He eventually has to face his ultimate nemesis: "Ratch" Ratcher (Norton). Will Admiral Pendleton (Forrest) ever get his precious plane back? Why is there always an Admiral Pendleton? And what is the true meaning of BLACK THUNDER?

Well, here we go with another plane slog. Why did they keep making these? Why are there so damn many of them? Why are they all so similar and bland? Sure, they tried a couple times to spice up this mush with a bit of nudity, but it's not nearly enough. It was 1998, when DTV was in the doldrums. Director Jacobson worked a lot with Don "The Dragon" Wilson on numerous projects around this time for Corman. But when it came to Black Thunder - which is a title that would seem more at home for a 70's Blaxploitation film - and a meet-up with two of our favorite people, Dudikoff and Norton, it seems that Jacobson couldn't summon up the energy to give these two guys a platform they were worthy of. It's a shame and a missed opportunity for sure. 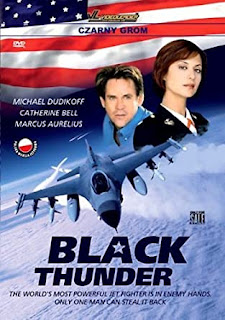 Once again, there is no character development so we as the audience can't possibly care about what's going on. Which isn't much of anything to begin with. Putting in endless scenes of snooze-inducing plane footage is not a substitute for good characterization, plotting, or anything else, really. Why they thought it would be remains a mystery. And not just for this particular slog. For all the countless others as well.
Even Dudikoff's normally cool hair is tamed into something not as cool this time. His wardrobe suffers as well - he was given a bunch of puffy jackets and high-waisted pants that make him look fat. Why would anybody do that to Dudikoff? Was someone jealous of how cool he is so they tried to sabotage him? Well, it only ended up hurting us, the viewers of this muck.

There are a small handful of positives (man, we're really trying to be nice here): there are some decent shooting-and-blow-up scenes (which should have been at the beginning and not the end, so it doesn't seem like "too little too late"), the aforementioned nudity (it was Corman after all and that's in the contract), the 90's CD-ROM flight simulator stealth graphics (i.e. the "invisibility"), and there's a baddie named Stone that looks like a cross between Sinbad and Ice-T. Sin-T if you will. Or perhaps Icebad.

Because of the above-stated reasons, Black Thunder is, surprisingly, better than two other similar films we can name: Active Stealth (1999) and Air Rage (2001). Granted, that's not the highest bar you can aim to reach. Like many other Corman outings, he had the good sense to make this 85 minutes long. Any more than that would really be trying anyone's patience. It may not be the best thing we've ever seen, but at least it's the right running time. We'll give them points for that.

Needless to say, a confrontation between Dudikoff and Norton deserved a better stage than Black Thunder provides. A bit more behind-the-scenes effort could have raised this above the typical plane slog, but clearly the filmmakers couldn't be bothered. Consequently, the viewer doesn't have much of anything to grab on to, and it's ultimately condemned to eternal "shelf filler" status. We would say Black Thunder is for Dudikoff, Norton, or Frederic Forrest completists only.

Comeuppance Review by: Brett and Ty
Also check out a write-up from our buddy, DTVC!
Posted by Ty at 8.10.21

I think this is more than video store shelf filler! Yes, its one of those stock-footage fighter-pilot movies, but its one of the better ones! I quite like this genre.

Movies like this are for fans of the genre, and we're glad you're one of them.