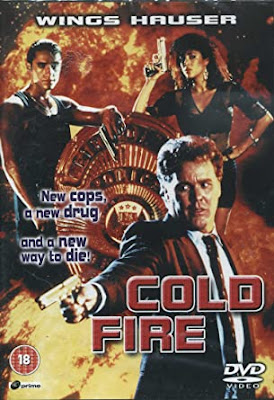 A new drug has hit the streets of L.A. It's called Coldfire and it looks like a bit of blue Powerade in a little vial. In order to stop the spreading scourge of Coldfire, two young police officers, fresh from their latest assignment of posing as high school students to root out Coldfire users, throw themselves into the newest and hottest drug war. Jake (Easton) and Nicky (de los Reyes) are the new generation of cops, and they're energetic, young, and hungry to make a difference.
They end up clashing with old-school cops like Milton Lars (Wings) and the hotheaded Dix (Brauner). However, the old school and the new school eventually have to learn to work together to fight Coldfire dealers Mr. Sheldon (Randall) and Groska (Cutt), an evil Russian who wants to use Coldfire to do nothing less than take over America. To quote the tagline on the box for the film, "New Cops, A New Drug, and A New Way to Die." Will we all become hopelessly addicted to COLDFIRE? Find out below...

Coldfire is the directorial debut of Wings Hauser, although he also directed Living to Die the same year, followed by The Art of Dying (1991). Keeping in mind that Coldfire - the drug - is "a new way to die", Wings seemed to be very attracted to projects that involved the words "Die" or "Dying", but only for about a year or so from 1990-91. Anyway, despite the fact that this was made by PM, it's not really an action film per se, although it has a couple of moments. It's a police drama, but with some comedic elements thrown in for good measure.

The Jake and Nicky plotline uses 21 Jump Street as, well, a jumping-off point. The tension between the young generation and the new generation of police officers provides a lot of the drama in the squad room. The young-old divide between the idealistic cops and the older ones like Lars is the background for the fight against Coldfire. Both Easton and de los Reyes put in really good performances, which is fortunate as they pretty much carry the film.
Despite the box art, Wings is not one of the main characters, which makes sense as he was probably busy directing. Although his role isn't very big here, this is Asher Brauner at his best. He should have been in the film longer, as his performance here reminded us why we like Asher so much.

PM really let Wings loose this time out, generously granting him the ability to make this 100-minute long extravaganza. While Coldfire loses focus at times, clearly Wings learned his lesson as far as pacing goes, as The Art of Dying is certainly a bit snappier.
However, there are plenty of characters on display to fill the time, so it's kind of a double-edged sword. Robert Viharo as Getz plays one of the best WYC's we've seen in some time, and Nancy Locke is a lot of fun as Dr. Tate. Darcy DeMoss makes the most of her role as Maria, Nicky's girlfriend. Cult film fans will know her from Friday the 13th Part VI: Jason Lives (1986), among other notable movies (including the aforementioned Living to Die), but we here at Comeuppance have to point out that she was in Stickfighter (1994). Any Stickfighter connections will always be pointed out by us if they're discovered.
However, as he usually does, the great Addison Randall steals the show as the effeminate baddie Mr. Sheldon. He does this high-pitched voice and a mincing affect which is extremely amusing. It also shows Randall's range, as it could not be more different from his turn as the evil racist in Deadly Breed (1989). It shows he has talent and range. He was almost unrecognizable here, although, to be fair, it would be hard to recognize almost anyone who gets tied to a fence while shirtless with a green garden hose. 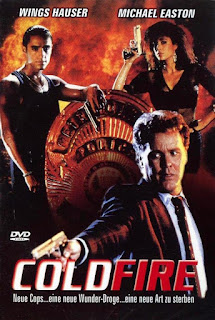 While many scenes go on too long and spin their wheels a bit, it's hard to complain when there are scenes of characters playing the arcade games Xenophobe and Rolling Thunder at a bowling alley. I'd love to believe that Wings chose the game Xenophobe on purpose as a sly and subtle reference to the fact that evil Russians are behind the Coldfire drug, but it was probably just there in the bowling alley that day.

Featuring a quality song - and used quite effectively in the film - "Walk On (Little Boy Lost)" by Lorraine Devon, Coldfire is a film that fans of PM and/or Wings Hauser will enjoy. Despite its length, other people may enjoy it too, just as long as you don't go in expecting a slam-bang shoot-em-up or beat-em-up. Keep in mind when you go into it that it's a video-store cop drama from 1990 with a long-ish running time for the material, and there's plenty to like about Coldfire.

Comeuppance Review by: Brett and Ty
Also check out a write-up from our buddy, DTVC!
Posted by Ty at 24.9.21