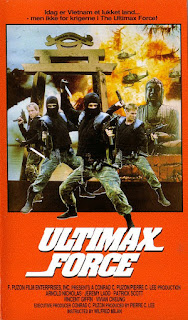 After an opening onscreen crawl informing us of the sad situation involving POW's in Vietnam, we then cut to the Ninja Society of California, where there is a ninja showdown involving extensive sword battles. After the ninja fight, the sensei, Hiroshi, informs the ninja school that a particular POW, Captain Dave Morgan (Simpson), is being held in 'Nam by the evil Col. Minh (Uhen). Morgan's sister Audrey (Miller) has, in their parlance, "invoked the code". In other words, the unbreakable bond between ninja warriors to never leave a brother behind.


So these 'American Ninjas', led by Chris Burton (Nicholas), but including Dick Foster (Ladd), Mike Dobson (Giffin), and Bill Norton (Scott) - the last of which has a thick New York accent not entirely befitting of a ninja as we know them - fly to Laos to link up with local contact Lloyd Mitchum (Hahn). Then our heroes are off to Vietnam to fight the baddies and rescue the POW's. Along the way, they meet a helpful woman named Phoung (Cheung), the daughter of a local woman and an American serviceman. She wants our ninjas to help her escape the hellhole she's living in now and escape to America. Will our group of heroes - presumably the ULTIMAX FORCE we've been hearing so much about - complete their mission?

Ultimax Force is a film that poses a question to the audience. That question is: what is Ultimax? And, secondarily, how much Ultimax can you stand? It doesn't have to be much, as the film is only about 80 minutes long, as most movies should be.

During that time, we get a lot of jungle action, as this is a solid entry in the Philippines-shot jungle genre. Huts will explode, but the coolest aspect of Ultimax Force is that our heroes are in full ninja regalia as they mow down baddies with Uzis. You don't see that every day. They also make full use of their ninja abilities to hide and remain unseen until just the right moment. And then more baddies wearing triangular rice paddy hats get blown away with ninjas firing their machine guns. It works. 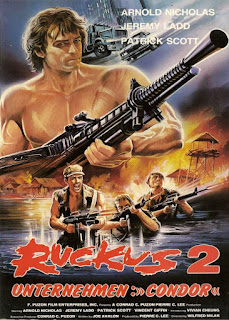 What would a film of this sort be without the time-honored barfight, at least one scene of Prerequisite Torture, and a synth-based soundtrack? Also like a lot of movies of this kind, it slows down right before the climax and there are some doldrums right before the explosive finale. You wouldn't think something with this brief a running time could actually slow down too much, but it does.

Maybe because there's not much plot to speak of, and what plot there is happens to be a "go to Vietnam and rescue the hostages" scenario we've seen countless times before. But we don't watch these movies for new and different plot innovations. We watch them to see huts explode, and, if time allows, to watch white guys in ninja getups blast people with automatic weapons. Which happens in spades here, so we're more than satisfied. 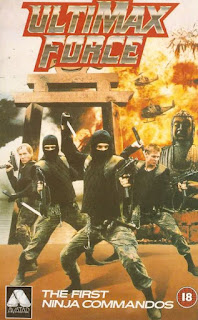 It does have a very cool ending, and, speaking of cool, our ninja team leader Chris Burton (Arnold Nicholas's only screen credit to date) wears a ninja headband in his casual, off hours, even when he's out of ninja uniform. Additionally, you know this is a Philippines-shot film because it features Henry Strzalkowski, and it was written by Joe Mari Avellana.

We weren't familiar with director Willy Milan, but hopefully we'll come across more of his work in the future. However, we should count ourselves as lucky we've seen this movie. It was on our must-see rare movie list for many years, because its release history has been spotty. In America, it was nonexistent, as it never received a VHS or DVD release. Sometime in the early 2000's it received a release on the Pegasus label in Europe, and another release as its German title Ruckus 2.


In the end, despite some slow moments, Ultimax Force is well worth seeing. It mixes the sillier aspects with the more explosive bits in a pleasing way. Fans of the jungle genre will most likely get the most out of it.
Comeuppance Review by: Brett and Ty