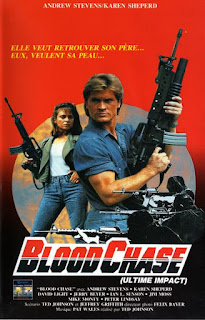 Eddie Nichols (Light) is the lead goon in a tight-knit group of baddies. Five years after committing a payroll heist, they're still looking for a man named Ross Anderson (Monty), because they believe he has stashed away the money. Unfortunately for Ross's daughter Cheryl (Sheperd), the goons have trained their sights on her, believing she knows the whereabouts of the cash. As a police officer highly trained in Martial Arts, she has no trouble fending off the baddies. But, for extra security, she involves her husband John (Stevens), and the two of them join forces to fight the thugs and get to the truth, step by step, about her father's whereabouts. Whether it's dealing with family lineage, or beating up bad guys, will this be the ultimate BLOOD CHASE?

You know you're in for a treat when during the opening heist sequence, the baddies are stealing bags of money with the words "U.S. Government Property" painted on them. Said bags wouldn't be out of place in a McDonald's commercial as they're stolen by the Hamburglar.

You've gotta love Teddy Page. He knows how to open a movie with a bang. Blood Chase is remarkably consistent throughout, and is a lot of fun to watch. To have Karen Sheperd and Andrew Stevens fighting alongside one another was a great choice, and the pairing works very well. Thankfully, Page doesn't skimp on the punching, kicking, shooting, and blow-ups.

Blood Chase has all the faces we know and love from these Philippines-set actioners, such as Jim Moss, David Light, Jerry Beyer, Mike Monty, Nick Nicholson, Eric Hahn, Henry Strzalkowski, and others. During this period of time, these men must have been consistently working in the Philippines film industry, and it's like a stock company of familiar faces that fans of the genre have grown to know and love. The addition of Shepard and Stevens only sweetens the deal.

You know the main baddie is evil because he yells at a waiter about his navy bean soup at the Pink Patio restaurant. He also has a classic evil laugh. There is a lot of funny/silly dialogue that is amusingly dubbed. The fight scenes are energetically done, which is amped up even more when the film is sped up slightly, giving it a Hong Kong-type feel. That's further reinforced with the character of David Hung (Chang), a very mysterious individual who helps out Cheryl and John in their quest.

Also, when something dramatic happens, there is a dun-dun-dun! musical sting on the soundtrack. You know it's not a revelation, just a dramatic moment, because the third note goes down instead of up. In yet another movie highlight, when John and Cheryl seek help from a police captain named Brad Murdoch, he has quite possibly the biggest nameplate on his desk that we've ever seen. He really wants visitors to his office to know that he is Brad Murdoch.


Blood Chase is recommended overall, but especially to fans of Philippines-set action outings, Karen Sheperd, Andrew Stevens, and anyone who enjoys navy bean soup.
Comeuppance Review by: Brett and Ty
Posted by Ty at 31.3.22

Love this one! Big fan of Teddy Page and this is one of the better ones. Totally going to plug my video about the Action films of Teddy Page here: https://youtu.be/-8B-5PqBc5s

Can't agree more! We love Teddy Page too. Thanks for the link to your video