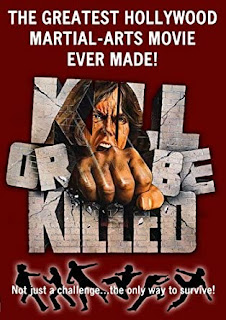 Baron von Rudloff (Coombes) is a delusional Nazi with a midget assistant (DuPlessis). Rudloff still has World War II flashbacks. He lives in a giant compound - as any villain worth their salt is wont to do - in South Africa. Steve Hunt (Ryan) is a heroic Martial Artist that is kidnapped by Rudloff, along with many other fighters, including Olga (Michelle). Rudloff wants to train them into being the ultimate fighting force so they can beat the team assembled by his arch-rival Miyagi (Ho-Tong). Evidently this sort of tournament happened before between the two men, but Rudloff wants a rematch because he thinks Miyagi cheated by bribing people with diamonds. So, seeing as they can't escape, it's KILL OR BE KILLED for Steve and Olga. Or will they have a few tricks up their sleeves?


Out of the two James Ryan 'Kill' movies - those being the movie under review today and the sequel Kill and Kill Again - we prefer the sequel to this initial offering. The sequel, while overlong, is more colorful and has significantly more going on.
Kill or Be Killed has almost no plot and thus it has some pretty serious pacing issues. Most of the final third of the film is one tournament-style Karate fight after another. Much of what comes before that are a series of Karate fights, laced with some humor (?) provided by the Chico character. Also there are some extended training sequences. And we learn how to make some sort of land schooner out of an old Volkswagen.

That's not to say the film doesn't have some cool moments, because it does, and the whole thing is ideal for the drive-ins of the day. It was tailor-made for the Bruce Lee craze of the late 70's-early 80's. As we all remember, everybody was Kung Fu fightin', so the good people of South Africa must have said, "Why not us?"

From there, it was a short step to getting a Sean Connery lookalike in full Nazi regalia to have his own Karate team. Then they fight another man's Karate team. Chico spends significant time assembling the team, which is done in a similar but better way in the sequel. As we wrote in our review for Kill and Kill Again, and mentioned when we were on the Exploding Helicopter podcast, it seems that a lot of people took influence from that film.
The original appears to be quite influential as well, because there is a Japanese character named Miyagi, and someone else later on catches a fly with chopsticks. Everyone pronounces it "Miya-jee", with a soft G, apparently, and there's at least one moment when he appears on screen and a gong sounds.


For the sequel, the humor is increased, but they did carry over the opening credits idea of projecting the names on people's bodies. They also had another barfight, and you can never have too many of those.


Overall, Kill or Be Killed could have used a bit more structure, and the endless fights toward the finale get a bit mind-numbing. But it's all very silly, and the score is quite good. It alternates from wah-wah funk to fuzzy electric guitar, and the song used during the car/schooner sequence was cool.


While the film probably worked better if you saw it at a drive-in in 1980, it's still worth seeing at least once, if only as a product of the time when those cats were fast as lightning, and it was a little bit frightening.
Comeuppance Review by: Brett and Ty
Posted by Ty at 22.4.22

I just saw this recently for the first time. The opening credits with all that Karate was awesome and i was all in. Then it got ridiculous especially when the main good guy makes whistling sounds! And the final show down was terrible. I do hope the sequel is better. Great review as always!

Thanks! The sequel is better and we're posting it this Thursday. You'll enjoy the sequel