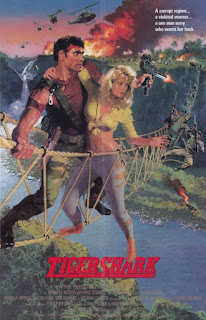 "In 'Nam we called him Tigershark, because he stalked like a tiger, and fought like a shark."
- Cowboy
Tava Parker (Stone) is a Vietnam vet who now teaches Martial Arts to kids at the Pai-O-Hana Karate School in Hawaii. When his girlfriend Karen Kirkland (Bryant) is kidnapped, along with other women such as Sherry and Aloha (Eva Winnercrans and Kasey Antonio, respectively, in their only screen roles), Tava "Tigershark" Parker snaps into action. He travels to the Philippines (where else?) and links up with his old 'Nam buddy Dave "Cowboy" Reynolds (Quade), and his local contact, the taxi driver Tony (Alvarez). Of course, the mission is not going to be easy, as the evil commie Col. Barro (Silayan) is holding the ladies hostage. Will our three heroes rescue the three hostages? And what will become of the TIGERSHARK?


Mike Stone, known for being a Martial Artist, stuntman, and associate of Elvis, here gets his one and only starring role. Just as Martin Kove sliced that pineapple with a samurai sword in Shootfighter (1993), here Stone kicks coconuts off a stand and shatters them. It's a very Hawaiian form of Martial Arts. In his quest to save the girls, he gets involved in a Punchfighting-type scenario, where the two fighters are chained together at the wrists, and they wear a sort of sandal with a metal piece on it that would definitely incapacitate the opponent.
As if that wasn't enough, there is a cockfight going on at the same time, and the blood from said cockfight is poured on the sandals. Well, that's what the screaming audience calls entertainment, I suppose.

While Stone is decent enough in the lead, and he can definitely carry the movie, he was helped a lot by John Quade as Cowboy. He puts in an energetic performance and he strongly resembles Charles Durning. Pamela Jean Bryant as Karen is always a pleasant sight to see, especially since the last time we saw her was in the classic "Geteven" (1993), which is a Comeuppance favorite.

Director Emmett Alston, known around these parts for 9 Deaths of the Ninja (1985) and his last directorial effort, Little Ninjas (1993) - but also for New Year's Evil (1980) - really makes you wait for any of the machine gun shootin', hut-explodin' , guard-tower-fallin' action. Most of it is saved for the grand finale. That's all well and good, but the movie overall seems to have a lack of forward drive and it drags in many places. Not that it's bad, per se, but because it has an overly simplistic plot, it should have been filled with many more thrills along the way.
Mike Stone wrote the script along with fan favorite Ivan Rogers. To the film's great detriment, Rogers does not appear on screen at any time. He was just on board in a writing capacity. If Rogers was in front of the camera, that would have improved things tremendously. Too bad that couldn't have happened.

Much like how Rage to Kill (1988) ended with the tender ballad "Do You Remember Love?" after countless people had been slaughtered, Tigershark goes down the same road for its end credits song. After many people are beat up, blown up, shot, or in any case mangled or killed, the soaring, midtempo adult-contemporary number "Two People, One Heart" by Joe Fagin and Tessa Niles croons away on the soundtrack. The song is very catchy and it's the perfect thing to have stuck in your head as you think back to Tigershark's Vietnam flashback scene.


While Tigershark did get a U.S. VHS release on New World, and had decent distribution worldwide at the time (especially compared to some of its contemporaries), it still appears to be little-seen and not very well-loved. That's not entirely fair, but let's face it, it is pretty middle-of-the-road stuff. It's not good enough to be great or bad enough to be awful. That being said, it does have its moments, however. But, for us at least, it's one-time-watch territory.
Comeuppance Review by: Brett and Ty
Posted by Ty at 14.4.22