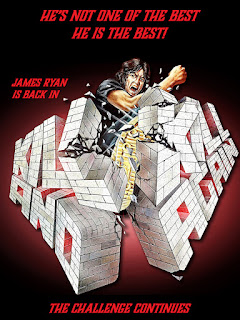 Steve Chase (Ryan) is still 'The Best' when he returns for this sequel to Kill or Be Killed (1976). This time around, a rich baddie named Wellington Forsyth III has taken over the town of Ironville, South Africa. He's renamed himself Marduk, renamed the town New Babylonia, and he's using some sort of potato extract to turn thousands of people into mindless slaves.
All this comes to the attention of Steve Chase when he's approached by a woman named Kandy Kane (Kriel of Reason to Die fame), and she informs him that her father Horatio Kane (Ramsbottom), a renowned scientist and not David Caruso, has been kidnapped by Marduk and forced to help create the serum used to zombify the population.

Chase's next move is to assemble a team in classic fashion, rounding up his buddies Gypsy Billy (Robinson), Hotdog (Flynn), Gorilla (Gampu), and The Fly (Schmidt). Together, the team invades the compound and attempts to extract Dr. Horatio Kane, but they're going to have to face Marduk's mind controlled Martial Artists. The top man of which is Optimus (Dorie). Will Steve Chase live to kill again...AGAIN?

Kill and Kill Again is a mixture of Martial Arts and broad comedy, but it's more watchable than similar fare such as Catch the Heat (1987) and Hot Potato (1976). There's a lot of comic-bookiness and plenty of outright silliness on display which is entertaining, but not 101 minutes worth of entertaining. If KAKA (that's the abbreviation for Kill and Kill Again) had been about 80 minutes, it could be a new classic. We love a good "assemble a team" movie and we're always up for some off-kilter 80's fun. But the running time is too long. A lot of the talking parrot jokes and other groan-inducing comedy could've been cut. But, on the whole, it's still worth watching, even if it's just to see how influential it is... 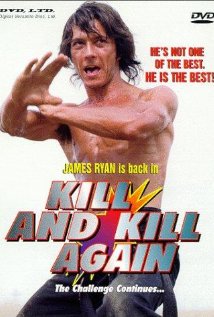 Stephen J. Cannell must have seen this movie and it "inspired" him to create the A-Team, which premiered in 1983. Gorilla is like B.A. Baracus, even down to the character trait of being afraid of airplanes. Hotdog wears a similar hat and has a similar demeanor to Howling Mad Murdock. Chase is like Dirk Benedict's Face, etc. At one point, right before they're going to storm the compound, they suggest doing it in teams, with Chase saying, "We're the B Team". We could go on, but there are other comparisons to be made.

What are the odds that the CSI Miami writers would have come up with the name Horatio Kane all on their own? And the creators of Transformers must have liked the name Optimus. Marduk clearly inspired Adam West's Professor Marduk from Maxim Xul (1991), and Marduk's girlfriend Minerva (Wilson) has a short, pink haircut that must have inspired the singer Pink (or P!nk as she sometimes prefers it). A movie highlight comes with a 'Bullet Time' effect that must have inspired the Matrix series, not to mention the Sniper series. So while certain people may make fun of Kill and Kill Again, clearly we're still seeing its influence in the culture.

Kill and Kill Again continues the tradition of projecting the opening credits on people's body parts that was started in the previous film, usually James Ryan's. Ryan is very suave, has a classic 80's mullet, and looks slightly like Billy Drago. While his "Kill" duo may remind viewers of Day of the Panther and Fists of Blood (both 1988), the Jason Blade duo, it's also worth noting that Ryan appeared in Code Name Vengeance (1987), Rage to Kill (1988) and The Last Samurai (1990).


The whole Marduk/mind control plot seems inspired by the Jim Jones incident that occurred in Guyana. But Jim Jones didn't have an odd-looking pasted-on beard. So far as we know. It may also remind you of the 'leader' episode of The Simpsons. He even forces half of his assembled flock to be shirtless men, in what may be the largest shirts vs. skins match of all time. Each of the 'assemble a team' moments comes with its own fight scene, and of course there's a barfight as well. The whole thing is perfect for drive-ins.

Speaking of the barfight scene, the film was cut in the UK by 73 seconds on its initial release, and it was probably this scene. Why? Because James Ryan dares to use nunchuks. The BBFC hates nunchuks. There are also Raphael-style sais in another scene. Could this have influenced Teenage Mutant Ninja Turtles as well?

In the end, we can see that director Ivan Hall improved a lot since Vengeance Cops (1971). Kill and Kill Again is a fun and ridiculous ride, but the ride is too long. Despite the over-inflated running time, we'd still recommend it, because it's just so nutty.
Comeuppance Review by: Brett and Ty
Posted by Ty at 28.4.22