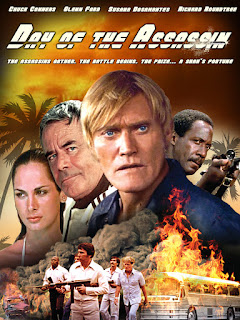 When the Shah of Iran's boat sinks to the bottom of a Mexican bay, word spreads that said sunken vessel contains treasure. And not just any treasure, mind you, but supposedly among the contents of the loot is a piece of paper with the most important information in the world. What is that information? Well, Christakis (Ford) wants to find out, and he's willing to pay big. So he hires Fleming (Connors) to get the paper. But it's not going to be easy, because treasure hunters from around the world want to get to it first, among them Fessler the Mute (Roundtree) and Dante Vallone (Rivero). Police Chief Jorge Gomez (Silva) is at a loss. Susana, AKA "The Princess" (Dosamantes) is swept up in it all. Which adventurer will walk away with the prized paper?


Day of the Assassin is a nice, harmless adventure outing that sports a handful of cool moments. It definitely has its flaws; it's a bit too "safe", if you know what we mean, and the peaks-and-valleys structure of the film has some pretty deep (i.e. slow) valleys. But, overall, it's pretty amusing and mildly entertaining, thanks to its cast, its quirks, and the direction of fan favorite Brian Trenchard-Smith.


It all kicks off with a fantastic opening sequence: a guy bombs, neck-snaps and knives people while parasailing. That's right, a man suspended by a parachute over a body of water by a boat manages to kill several people, while Jorge Rivero watches the incident through a pair of binoculars. We can't say we've ever seen that before. 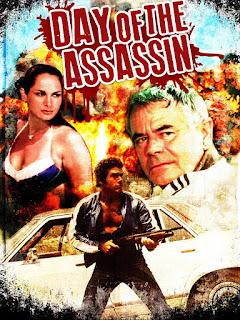 Soon enough, we're introduced to Glenn Ford as Christakis. He wears gray formal suit pants and dress shoes with a cream-and-red Adidas warmup jacket, gold chain, and sunglasses. He may not be in the movie that much, but at least he has a funky wardrobe. Then we get to our hero, Fleming, played by our real-life hero, Chuck Connors. At least in Day of the Assassin, he looks like what Dolph Lundgren will look like 40 years from now. As Elderly Dolph goes on about his adventuring, he then encounters lots of his competition, the most noteworthy of which are Fessler and Gomez.


That's something we appreciated about the film - it features a panoply of middle-aged or older character actors that we know and love. Yes, Roundtree doesn't say anything (because he's "mute", you see), but it was nice having Ford, Connors, Silva, and Roundtree all together. Jorge Rivero is the young man of the group. Dosamantes is the only woman. Perhaps there should have been more women.


Connors, instead of wearing his usual Brooklyn Dodgers hat, has a variety of different baseball caps this time around. Maybe this was an in-joke because he always insisted on his trademark Dodgers cap, but he's seen with Baltimore Orioles, Chicago Cubs, St. Louis Cardinals (?) and perhaps one other baseball team's logo on his head. Or he'll put the hat on a desk in plain sight. Even in such a light and jaunty outing as Day of the Assassin, there's some Prerequisite Torture of our hero, Fleming. Guess you always have to have that, even in something pretty fluffy like this.

Other movie highlights include the standout score by Bebu Silvetti, who is perhaps best known in America for his Spring Rain disco album from 1977. He contributes some library music-esque funk and other notable cues. Put that together with the picturesque Spanish locations (although the movie is set in Mexico) and you've got two noteworthy elements right there.

When it comes to the films of Brian Trenchard-Smith (who's the original BTS), Day of the Assassin does not reach the heights of The Man From Hong Kong (1975), or the Jason Blade diptych Fists of Blood and Day of the Panther (both 1988) (he must like "Day of the..." movie titles), but it still holds a certain charm, especially when cars blow up with little or no provocation.


Day of the Assassin originally came to home video in the U.S. on the Prism label on VHS. There doesn't seem to be any DVD history of the film, then it jumped to Amazon Prime. Despite the film's shortcomings, there's still plenty to enjoy here, especially if you're a fan of anyone involved.
Comeuppance Review by: Brett and Ty
Posted by Ty at 5.5.22