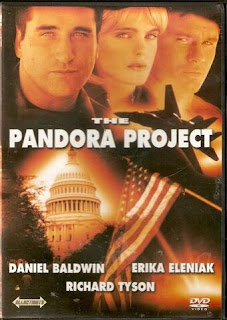 When William Stenwick (Tyson) steals a newfangled laser weapon from the military and attempts to sell it for big bucks on the black market, Captain John Lacy (Baldwin) snaps into action. CIA Director Houtman (Todd) chose Lacy for the "track down and stop Stenwick" mission because Lacy and Stenwick have a past. Former friends and now rivals, Lacy is now chasing Stenwick from Colombia to Los Angeles in order to retrieve the laser (i.e. "The Pandora Project"). Lacy is doubly under the gun because he's due to marry "GNN" news anchor Wendy Lane (Eleniak) in just a few days. Can he save the day in time to get to the chapel with his longtime love? Or will the Pandora Project destroy us all? Don't be too afraid to find out...
We know what you're thinking. The President of the United States is a character in this movie. Bo Jackson is in this movie. We regret to inform you that Bo Jackson does not play the President in The Pandora Project. We thought we'd get that out of the way right off the bat so no one's hopes got too high. Jackson plays a soldier named Manson who comes and goes so quickly, it's almost at Bear-level proportions. 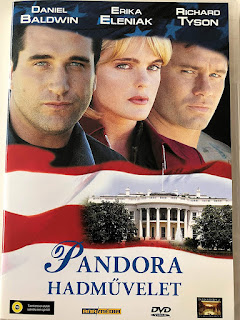 But the good news is, we were pleasantly surprised by The Pandora Project. Rather than be yet another plane slog, there's actually very little dogfighting and plane footage in the film. It does fit fairly comfortably among its late-90's ilk, such as Desert Thunder (1999), Black Thunder (1998), Stealth Fighter (1999), Active Stealth (1999), Tactical Assault (1998), and Surface to Air (1998), etc., etc., etc. Some of the above may or may not have also starred Daniel Baldwin. But The Pandora Project is probably among the best of these types of these Jim Wynorski or Fred Olen Ray-made DTV military outings that use footage from other movies (in this case it's Clear and Present Danger). In other words, it's not really a plane slog at all. The dialogue is a bit better than usual and there are some good characterizations by the B-actors we all know and love.


Richard Tyson is much more charismatic here than he usually is. He wears different Hawaiian shirts throughout the film, as well as a baseball cap. He's your classic wisecracking villain. In the beginning it seems like he commands a cadre of ninjas, but those are just his helpers in Delta Force-esque outfits. Most of the time, it's just Tyson as a solo baddie, which is more than enough this time around. The presence of Eleniak was welcome, as always, but she should have done more. Her part was a bit too small.
Tony Todd has a commanding presence and a voice that you really want to pay attention to. His name in the film, Houtman, is markedly similar to Trautman, and he always wants to know what the action man in the field, Lacy, is up to. Hmmm...


Speaking of Baldwin, he has a Corey Hart-esque spiky brush cut, and he gives hope to those among the population who may be a bit on the chunky side but who still want to get into the fight, be physical, and be the hero. Interestingly, his military code name in the film is Avatar. The planet that the movie Avatar (2009) takes place on is Pandora. Looks like a certain James Cameron was watching The Pandora Project.
Most of the fight/action scenes are very, very stupid (although in more-or-less a good way). The laser scenes are also pretty amusing, and the whole idea that the laser will kill someone, and instead of incinerating them into a pile of ashes, they're just lying there with their eyes closed without a scratch on them never failed to provide a few laffs.


In the end, The Pandora Project is one of the better - or, should we say, more entertaining - entries in this particular DTV subgenre. In other words, don't be afraid of watching it if you come across it. Be sure to stay tuned for the after-credits sequence as well.
Comeuppance Review by: Brett and Ty
Posted by Ty at 13.5.22

This one is pretty ordinary ... I ordered it online because the trailer looked good, but it really doesn't live up to that at all.

We respectfully disagree, it has a certain and different charm than the other plane slogs out there.