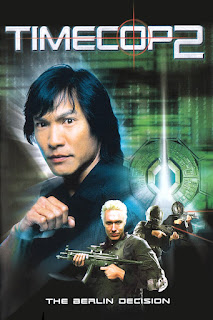 Ryan Chan (Lee) is a dedicated member of the TEC, or Time Enforcement Commission. His job is to stop people from going into the past in order to change the future. In other words, he's a Timecop. He faces a classic conundrum when he finds himself in Berlin in 1940. Brandon Miller (TIG) wants to kill Hitler. Chan is worried about how that would alter the future in ways that we couldn't possibly imagine, so he and Miller fight it out.
After eventually going to prison, Miller devises an ingenious plan to escape, and he begins altering the past so the entire staff of the TEC don't exist in the present time, which happens to be 2025. With time literally running out, Chan has to stop his new arch-nemesis Miller before he pre-emptively causes him not to be born. Time travel, moral and ethical questions, and a few surprises are in store before the final confrontation in the college rotunda. What will be the ultimate verdict in THE BERLIN DECISION? 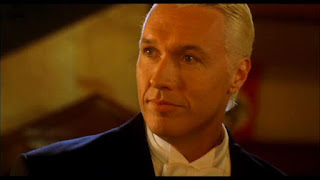 We really enjoyed Timecop: The Berlin Decision. You would think that a 2003 DTV sequel to the 1994 Van Damme classic might not be so hot, but you'd be wrong. There's a lot to like about the film, starting with the script. We want to give a shout out to screenwriter Gary Scott Thompson, and his script (based on the comic by Mike Richardson and Mark Verheiden). We rarely mention the writers of the movies we review, but in this case it seems warranted, because Thompson et al delivers a refreshingly intelligent script with a lot of good ideas in it.
It must have been really hard to write, because not only did he get across some pretty complex ideas in an easy-to-understand way, which is not easy to do, but he neither dumbed down the film nor made it so abstruse that it's impossible to follow. He hit that sweet spot for audience understanding, and he deserves a lot of credit for that. It must have been difficult for him to keep track of all the time loops and jumps and their ensuing consequences. But not only does he do it, he never once insults the audience's intelligence. In fact, it's just the opposite: he encourages us to use our brains. We loved that about the film. 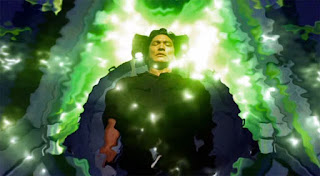 Rather than have the entirety of the plot take place in Berlin, which, based on the subtitle, you'd think it would have done, there are plenty of time jumps to other eras, and full use is made of the Timecop concept.
We get to see Jason Scott Lee in a variety of diverse scenarios, including the Old West, a prison riot, and, my personal favorite, the 80's dance club. He gets to use his Martial Arts skills in all these different settings, which is a delight for the audience. Amazingly, there was supposed to be a time jump to Hamden, Connecticut in 1987 in the film. It was the only time jump that was planned but never executed. That's a shame, because if it happened, you might have seen me walking around in the background as a young tot. Of all the places in the world they could have mentioned...Hamden? Wow.
Ulterior Motives (1992) co-stars Thomas Ian Griffith and Mary Page Keller reunite here, but I don't think they have any scenes together. Tava Smiley is here as Jeffers, Ryan Chan's co-worker on the TEC. We remember her from the Mario Lopez/Carlos Mencia outing Outta Time (2002) - yet another movie she starred in that features the word "Time". Coincidence? Well, probably.
Sven-Ole Thorsen and Robert Carradine have blink-and-you'll-miss-em cameos. But, of course, the real star of the show is Jason Scott Lee. He should have done more DTV action movies like this one. Interestingly, the whole subplot about his character Ryan Chan's parents meeting and his perhaps never being born is reminiscent of Back to the Future (1985) - and one of Lee's first screen roles was in Back to the Future Part II (1989). So clearly he's no stranger to that sort of thing.
As good as Stephen King's 11-22-63 is, we have to wonder if his whole idea of time travel and preventing the Kennedy assassination didn't come from Timecop: The Berlin Decision with its time travel and potential Hitler assassination. King must have seen this movie. Of course, these sorts of time puzzles and paradoxes have been discussed throughout the ages. That's what's so good about the film: it takes that intellectual component and adds in some Martial Arts action. What's not to love?

On top of all that, the end credits start rolling at a mere 77 minutes. It crams in all that good stuff in a wonderfully brief running time, so the audience is never for one second bored. We give it a lot of credit for that. Overall, the film is a more-than-worthy sequel to the original, and quite underrated. We give it a strong recommendation.
Comeuppance Review by: Brett and Ty
Also check out write-ups from our buddies, DTVC and The Video Vacuum!

Well this is an exciting review! I have this on DVD somewhere, hopefully I can find it!

Hope you can! You'll enjoy it for sure