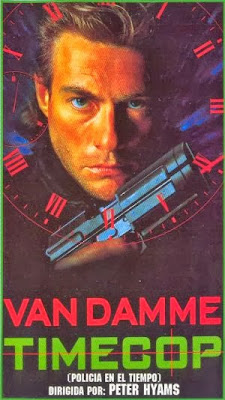 In the future year of 2004, time travel is possible. But since the future has not happened yet, travelers can only go back in time. Because baddies want to go back in time to commit crimes, a new government agency, the Time Enforcement Commission, is formed to prevent and police criminal actions by people who travel in time. Max Walker (Van Damme) is chosen to be part of the TEC team. But since a bunch of thugs attacked and killed his beloved wife Melissa (Sara), Walker has hit the bottle and is living in the past, lamenting his lost love. But it hasn’t prevented him from being a top timecop, and his incorruptible nature has caught the ire of a very formidable foe, Senator McComb (Silver).

McComb has his eye on the presidency, and all the millions of dollars it takes to get there, and is willing to do anything to achieve his power-hungry goals. When Fielding (Reuben) enters the picture, things get even more complicated. Can Walker stop McComb, other time-baddies, and possibly even time-rescue his wife in the process? Find out today…

It’s really no surprise as to why Timecop is one of the most popular and well-known Van Damme titles. It’s a completely mainstream, professionally-made product that contains thought-provoking ideas as well as classic Van Damme action scenes. JCVD gets all the best lines (90’s one-liners at their best), and the movie is as solid a piece of entertainment as you’re likely to find. Director Peter Hyams would re-team with Van Damme the next year for Sudden Death (1995), and is the father of John Hyams, who is a brilliant director in his own right, known for working with JCVD in Universal Soldier: Regeneration (2009), Universal Soldier: Day of Reckoning (2012), and Dragon Eyes (2012). So the bloodline continues.

Timecop also qualifies as one of our favorite items, a movie that takes place in the future which is now the past, in this case 2004. Max Walker’s powerful mullet must have been reassuring for viewers in 1994 to see, knowing they would still be fashionable ten years into the future. But were they fashionable in 1994? Regardless, Walker is the type of guy who tells purse-snatchers to read between the lines on his boot, and that’s good enough for us. Of course, Van Damme does more than one split, including one that saves his life, in an attempt to show viewers that they ARE necessary to constantly do, dammit.

This also qualifies as one of many movies in which there are two Van Dammes. As we always say, it must have been in his contract. The great Ron Silver was perfectly cast as the smug politician/baddie (hey, aren’t they one and the same?) His car even has the license plate SENATE, thus broadcasting to the world he’s an evil megalomaniac to be reckoned with.

Add to Silver and Van Damme the beautiful Mia Sara, some sax on the soundtrack, the time-honored warehouse fight, and the fact that the special effects are all wonderfully pre-CGI, and you have a winner that trumps the lackluster competitor Stargate (1994) in just about every way. And it wouldn’t be a 90’s sci-fi movie without at least a little bit of VR. VR was huge in the 90’s. It found its way into movies like this, which don’t even really deal with VR. In the 90’s, VR was the future.

Also slated to be the future back then were minidisc players, and surely Timecop must be one of the only movies in history to feature one. Speaking of music, songs on the soundtrack include “Does Anybody Really Know What Time It Is” and “Time Won’t Let Me”, in that case covered by The Smithereens, and multiple shots of clocks get the viewers’ minds in the right space to appreciate the time-y goings-on.

In all, Timecop is a very well-written, well-directed, and just all-around well-made film. You’ve probably already seen it, but it certainly stands up to repeated viewings.

Also check out a review by our friends at Action Elite!
Posted by Ty at 23.10.13

One of my favorite Van Damme flicks. Hyams could really make a quality product back in the day. Let's hope his new one with Van Damme can deliver as well. Great review guys!

Classic Van Damme. I watched it in the old movie theater Bio Rex in Helsinki. The reason for Max Walker's mullet still being in fashion both in 1994 and 2004 is that he has been time-copping so much that everyone in past times has realised the power of the mullet, making it a constant of fashion like Levi's 501.

Roger: Haha! Great point about the mullet. Also that's really cool you saw this in the theater.

Shit, I wish I had seen this in the theater. But owning it on DVD is good enough for me. I love Timecop.

I'll ask the same question I always do when this movie comes up, though: Why the hell can't past-you and present-you touch on pain of implosion? It's not the same matter if it's in two different places at the same time, and even if it was, so what? That will forever bug the hell out of me.

Sir Phobos: I don't know if you've seen Timecrimes, but it deals with the same phenomenon referencing Schrodinger's Cat. That's the mystery of Timecop!

Ty, did you see another Timecop movie without JCVD and with Thomas Ian Griffith as a villain?

You're dead right about virtual reality being pointlessly included in many 90s films. My favourite example is its utterly redundant inclusion in Disclosure starring Michael Douglas and Demi Moore. Brilliant!

Master: Saw the sequel. It was pretty fun. No problem about your english.

Exploding: Haha! Totally forgot about that in Disclosure. They should bring virtual reality back!

The plot has a few holes but EVERY time travel tale does. Very enjoyable and I especially liked Bruce McGill as the director of the program. My favorite time travel action movie [other than Terminator] is Retroactive with James Belushi (and Sharon Whirry). I like G.I. Samurai with Sonny Chiba as well. Speaking of Belushi, my faves with him are Angel's Dance, then Made Men, then Retroactive.

Thanks for your comment. Always wanted to see Made Men. Happy to hear its worth watching. Totally agree about Retroactive and Bruce McGill, solid character actor.