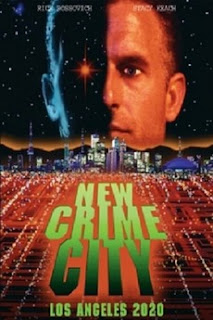 In the year 2020 - the future - crime is so rampant in Los Angeles that a huge section is cordoned off and dubbed "Crime City". Naturally, no one wants to go there, but Anthony Ricks (Rossovich) has to, because he's "The Best". At least that's what Police Chief Wynorski (Keach) calls him. After staging a mock execution for Ricks, presumably so he can be, in the eyes of the public, "dead", Wynorski gives him the task of infiltrating Crime City to stop the evil Ironhead (Dean) from unleashing a virus on the city. If he can get an antidote as well, so much the better. Along the way, he meets Darla (Rose), and the two of them face many trials and tribulations on the road to the ultimate confrontation with Ironhead. With the odds stacked against them, will they ever survive NEW CRIME CITY?


New Crime City (which we initially thought was called New Crime City: Los Angeles 2020, but apparently that's just the tagline on the VHS box) is yet another Roger Corman attempt to make Escape From New York (1981) with no budget. Much like Future Kick (1991), Bloodfist 2050 (2005), Dragon Fire (1993), and others, we have our heroes fighting their way through a "futuristic" wasteland on the way to their ultimate goal. These obstacles include, but are not limited to, going to a creepy monastery, Punchfighting, Punchfighting with electrical doohickeys that shock your opponent, and jousting while on dune buggies of some sort. Just like we do in 2020. 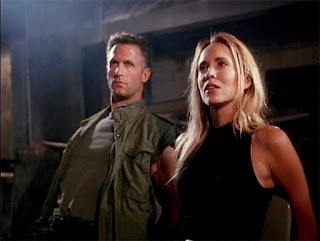 Hero Rick Rossovich looks like if Harland Williams was a Baldwin brother. He gives a monotone, monosyllabic performance that is truly Ron Marchini-esque. It's also pretty funny. He comes off as possibly a jerk (?) but the audience doesn't hate him. But they never really grow to like him either. By comparison, Rick Dean as Ironhead puts in a Jim Carrey-like portrayal, so the audience really does hate him. It was the 90's, after all, and Jim Carrey was hot. The box art makes Rossovich look like some kind of robot. He's not. Like us, he's just a man.


It's clear that the makers of Doomsday (2008) must have seen this movie, because the character of Juice (Ross) must have been an influence on that film. We were very happy that fan favorite Sherrie Rose was one of the leads here. She helps a lot in maintaining audience interest. We never really warm to her character either, but at least it's Sherrie Rose. She puts a lot of good energy in, and that was nice to see.


Stacy Keach's role is small but he helps things too. His character name, Wynorski, is a not-so-subtle nod to Jim, who has ties to Corman. Keach has some sort of indefinable accent that presumably is meant to make him seem sinister. Both Rick Rossovich and director Jonathan Winfrey worked with Keach again on the 90's Mike Hammer TV series. The experience of working on New Crime City together must have really bonded them.


Winfrey would go on to direct both Excessive Force II: Force on Force and Bloodfist VII: Manhunt the next year after this, in 1995. Apparently, New Crime City was shot in Peru. That might explain certain things, including the soundtrack and on-screen appearance of a Spanish-language band labeled in the credits as Frangio Antich & "Los Perros", but are known as simply Los Perros in their native country. Apparently these guys were a pretty big band in Peru, and they supported Ian Gillan on his Peruvian tour in 1992.


New Crime City has some amusing moments, but it's not exactly required viewing. It probably sat on a lot of video store shelves back in the 90's. Only fans of the Corman assembly line that made these sorts of things would be interested in going out of their way to see it.
Comeuppance Review by: Brett and Ty
Posted by Ty at 17.6.22