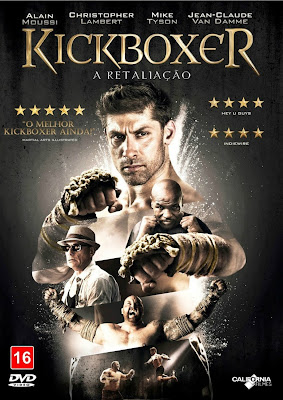 Eighteen months after the events of the prior installment in the series, Kickboxer: Vengeance (2016), we now see that Kurt Sloane (Moussi) is a successful MMA fighter. His success seems to be short-lived, however, as a maniacal fight promoter named Thomas Moore (Lambert) has him kidnapped and shipped back to Thailand. After being imprisoned and regularly tortured, Moore states that if he fights a giant named Mongkut (Bjornsson), he will get a million dollars and his freedom back.


The only problem is that Mongkut is a genetically-engineered beast, bred from the DNA of top former fighters, and injected with chemical adrenalin shots to boot. Also, he's 6'8 and 400 pounds. So Sloane goes back to what he knows: training rigorously with his mentor Durand (Van Damme). He also finds help from his fellow prison inmate Briggs (Tyson). Of course, the day of the final fight arrives and Kurt Sloane has to face his biggest challenge yet. Literally. Will it soon be time for some KICKBOXER RETALIATION? 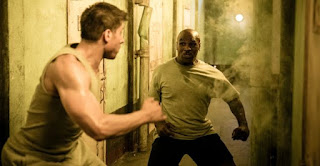 When you first turn Kickboxer: Retaliation on if you watch it on Netflix, you can't help but notice that the running time is an hour and 50 minutes. For those keeping score at home, that's almost two full hours allotted for the seventh film in the Kickboxer series. What could they possibly have to say that they haven't said before - and that would require that much time to say it in? So we were waiting for a reason - any reason at all - that would justify that length. We never really receive an answer as to why the film couldn't be 90 minutes or less. But that's not to say that there aren't some redeeming moments.

For example, every time Mike Tyson is on screen, things perk up immensely. He should have started his acting career back in the 80's, to capitalize on the fame of Mike Tyson's Punch Out!! for NES. We realize he had some problems back then, but that didn't stop other people. Regardless, we're thankful he launched an acting career at all. He gets a great introduction to his character, and Tyson is undoubtedly one of the best parts of the film.

Fan favorite Christopher Lambert is also here, looking quite a bit like James Caan this time around. In other movie highlights, Van Damme gets into brief fights with both Tyson and Lambert. The one with Lambert is a sword fight, naturally. These are combinations of people we've waited years to see. So the film doesn't let you down in that department. Also the "blues fight" was well-executed. But the final fight with Mongkut goes on for an interminably long amount of time, and if indeed Mongkut has the strength of four men, as was stated, then Tyson and Van Damme should have joined in the fray for a four-way fight. That would have evened the odds. But no, it just gets to the point where you're shouting, "somebody just win already! I don't care who!"

Somehow it has transpired that lead actor Alain Moussi - as Kurt Sloane - resembles John Krasinski (AKA Jim from The Office) even more in this movie than he did in the last one, and this only came out two years later. This leads to audience outcries such as "He's fighting for Pam!" or, "I'll get you, Dwight!"

Nevertheless, the storyline here is a direct continuation from Kickboxer: Vengeance, complete with repeat characters and references to the prior film. But this one adds yet more (time-consuming) elements such as an opening fantasy sequence, Prerequisite Torture, Mongkut-unrelated Punchfighting, and some sort of cat-and-mouse game with scantily-clad assassins. It seems not so long ago that we watched Boyka: Undisputed (2016), which also has a plot where a mere mortal man must mix it up with a massive meathead. You may remember Martyn Ford as the scary Koshmar. However, the opening credits sequence is cool because it pays tribute to Van Damme and past installments.

Much like the Sniper series, it appears that the Kickboxer series is heading down the road of endless, and perhaps unnecessary, DTV installments. The movie is not without its occasional charms (OK let's face it...MIKE TYSON!) but ultimately it doesn't justify its running time, which is more over-inflated than Mongkut himself.


While we certainly didn't hate Kickboxer: Retaliation, it's impossible to get around the fact that it would have been more impactful if it was shorter.
Comeuppance Review by: Brett and Ty
Also check out a write-up from our buddies, DTVC and The Video Vacuum!
Posted by Ty at 15.7.22

Personally I loved how long the final fight was.