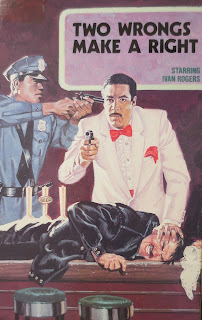 Fletcher Quinn (Rogers) is an Indiana-based club owner and one of the smoothest, suavest guys in town. When the evil gangster Jack Balentine (Blackstone) sends his goons after him, including the dastardly Lake (Komenich), so they can shake down Quinn because they want his club, they soon find out they've got another thing coming. You don't mess with Fletcher Quinn. While the police - Lt. Zander (Pyle) and Sgt. Vellosi (Rizk) - are tracking Quinn's every move, Quinn has to protect his girlfriend Jayna (Wu) and himself from the baddies who want him dead. According to Quinn's buddy Winston (Sansing), "Two wrongs don't make a right, but a man's got to do what a man's got to do." Will Fletcher Quinn be the one to do it?


When, generally speaking, people talk about 80's movies, your average film fan off the street has some idea of what that means to them - typically John Hughes, E.T., Spielberg, Ghostbusters, Indiana Jones, maybe the Friday the 13th or A Nightmare on Elm Street sagas. But there is a whole other world out there - and Ivan Rogers never seems to enter the conversation. Two Wrongs Make A Right, filmed in 1986 - the same year as Pretty in Pink - and released in 1987, is an 80's movie too. Perhaps it's time that people take a look back at Rogers and reassess his output.


That being said, Two Wrongs falls somewhere in the middle of the Rogers canon that we've seen so far. It's better than Ballbuster (1990) but not as good as the mighty One Way Out (1987). Sadly, they can't all be One Way Out. That's a fact of life we're slowly coming to terms with. Director Robert Brown was the assistant director of One Way Out, so we were hoping he'd bring more of that sort of style to the proceedings. As it happens, Two Wrongs was more of a warmup towards Rogers's magnum opus. At least it's shorter than the overlong Ballbuster, so even if it's not entirely your cup of tea, it won't take up much of your time. 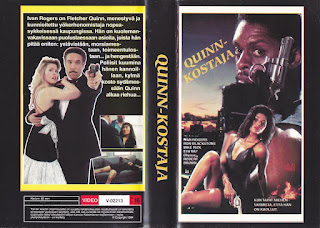 There are some very silly shootouts and a ridiculous barfight on display. As usual, Rogers looks like Richard Pryor and doesn't say that much. There are some catchy music cues and plenty of the time-honored sax on the soundtrack. While we do praise the 85-minute running time, even with that there are plenty of slow moments and the film tends to drag. There isn't a ton of forward momentum and very little oomph along the way.


Some Rogers regulars (which sounds a bit like something from the Civil War) are present and accounted for, such as Rich Komenich and Dossie Sansing - credited as Dosey Samsing, and we're not sure which one is correct but it's likely not the latter - still with his Kool Moe Dee sunglasses. We would say he steals the movie, but the guy who runs the used car lot really shines. We don't know his name, but we would have liked to have seen more of him. One of the charms of low-budget, regional film production is seeing semi-professional or non-professional actors at work. You get plenty of that in the Rogers oevre.

Could you say that Ivan Rogers put Indiana film production on the map? We're not talking about Hollywood productions that have shot films there and then left. We're talking about homegrown productions from the Hoosier State. Not being from Indiana, we perhaps would need an expert on local history to give us the facts. But if there is an Indiana walk of fame, surely Ivan Rogers should be on it.

Two Wrongs Make a Right, like other Rogers films, has a spotty and underwhelming release history. There was a U.S. VHS release on Unicorn Video that's even rarer now than it was back when it originally came out. Notably, there's a Finnish VHS release under the title 'Quinn-Kostaja' that actually features Lawrence Hilton-Jacobs on the cover! Sure, Ivan is on the back (which, in this case, makes it all the more confusing) but that definitely qualifies as a "WTF Moment" in the annals of videoland.


In the end, as stated earlier, Two Wrongs is midrange Rogers. It lacks pizazz, and for that reason, if you haven't seen One Way Out, see that first before venturing out further into Rogersland.
Comeuppance Review by: Brett and Ty

Some info about the Finnish VHS: The Finnish title of the movie is Quinn The Avenger. The cover is actually the cover of Quiet Fire starring LHJ. The slogan is also the same: When you kill a man - make sure he’s dead. Quiet Fire was never released on VHS in Finland. I guess the Finnish distributor either mixed up the covers or simply thought the Quiet Fire cover was cooler.

Finland has a governmental database of every film released here and you can find it here: https://elonet.finna.fi/
It’s not on the level of Imdb, but it provides a lot of interesting local info about e.g. in what theatre the film had its Finnish premiere, when it received its age restriction, whether it was cut or not, and what its tax percent was. The database is accessible in English.