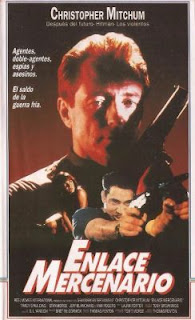 When the evil Col. Ivan Romanov (Mitchum) attempts to flood the streets with new, high-powered weaponry and make a huge profit in the process, Dallas detectives Joe Morris (Patterson) and Nick Harris (Morse) snap into action. Perhaps due to the fact that Romanov is flanked by his own Trenchcoat Mafia of goons, Morris gets shot and John Burke (Blanchard) becomes Morris's new partner. Of course, Captain Matthews (Rogers) wants answers. To unravel the mystery, they first head down to the local strip club and ask Tina Wells (Spaulding) for help. Wells fears for her life and is afraid to talk. So Morris and Burke must go it alone in their quest to take down Romanov and his acolytes. Will they miss their mark? Or will they hit their STRIKING POINT?


Imagine, if you will, a cross between Cop-Out (1991) and Miami Beach Cops (1992). If that comparison makes no sense to you, just try to imagine a very low budget effort with some ups and downs. The opening scene involving Chris Mitchum and some homies doing a gun deal gone wrong is very, very funny. You would think (and hope) the rest of the movie would continue on in this vein, but it doesn't.


While there are some silly shootouts and blow-ups, at about the halfway point the film stops dead in its tracks as our two heroes sit on the couch, smoke cigarettes, and discuss their lives. It goes on for an inordinate amount of time. Finally there's an action scene (and one of the better ones), then it's right back to the couch. It goes on for so long, it will remind you of a play with one simple backdrop, like Waiting for Godot. In this case, it's more like Waiting for Action. 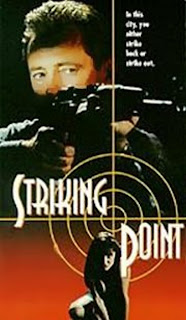 Later on, there are even more scenes like this, including an extended climax in the time-honored warehouse, with a pure-black, "Charlie Rose Show" background that seemed to turn up again and again in lower-budgeted efforts like this one.

Chris Mitchum didn't seem to put much effort into his "Russian" accent, with amusing results. One of his lackeys continually said "Da", to remind us, the audience, that they are indeed Russian. While Jeff Blanchard as Burke is reminiscent of former talk show host Craig Kilborn, we would have liked to have seen more Rocky Patterson.


While the film was not directed by Bret McCormick, it was produced by him, and it includes some of his stock company, if you will. Notably the aforementioned Patterson, and Tracy Spaulding, who was in his Armed For Action (1992) with Patterson. Here she plays the world's most listless stripper. Maybe she was down in the dumps because she had just appeared in the dire The Deadly Secret (1994). Both Armed For Action and The Deadly Secret featured Joe Estevez. This movie needed Joe Estevez.

But we got Ivan Rogers, who has become a fan favorite over the years. For the first time (at least for us) he's bald in the film, which gives him a sort of Montel Williams vibe. But his trademark soft-spokenness remains.


In the sound department, while the dialogue can be quiet and muffled in that way that DTV movies from the era tended to be, at least there's some sax on the soundtrack, as well as a catchy end-credits song (that should have appeared in the movie during a training sequence, as we always say) called 'The Majic of Pain' by a band called Crawfish.


While this is the only directorial effort to date for Thomas Fenton, he did go on to have a good career in Hollywood, it seems. Apparently people were impressed with a man with Striking Point as his calling card. Released on VHS by Cabin Fever, Striking Point may appeal to those with a taste for mid-90's under-the-radar DTV efforts, but it does have some issues.