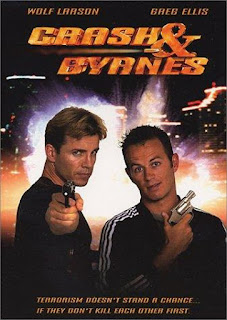 A woman named Lissette (Pacula) is an evil terrorist, as you might expect a woman named Lissette to be. She and her goons plan to drop a virus over the city of Seattle, killing, potentially, millions of people. But she's going to have two very big obstacles in her way: Jack "Crash" Riley (Larson) and Roman Byrnes (Ellis). While the two guys are the Original Odd Couple, insofar as Crash is blonde and American and Byrnes is wacky and British, they team up to fight crime and to stop Lissette. As they're doing this, a man named Shannon (Williams) takes an interest in them. He recruits them into a secret organization called SPHINX, which deals with sensitive and off-the-books law enforcement matters. Will Lissette succeed? or will CRASH AND BYRNES spoil her dastardly plan?


Crash and Byrnes may have that junky, low budget, "ready for syndication" look and feel to it, but you can't really hate it. Every time they use very inappropriately-matched stock footage, fast motion, or silly-looking shaky cam during the action scenes, you kind of just have to throw up your hands and admit to yourself, "hey, I'm watching Crash and Byrnes. It's okay. Maybe I shouldn't be so critical all the time." It's a bit like in our review for Radical Jack (2000), where we pointed out that at a certain point a revelation comes that "I'm watching Radical Jack." Same thing here.


Further comparisons could be drawn to Logan's War: Bound by Honor (1998) and The President's Man (2000). They're all very late 90's/early 2000's syndicated television in look and feel. Crash and Byrnes is no exception. Which perhaps isn't surprising, given all the connections to L.A. Heat, the TV show that featured Wolf Larson and Steven Williams. Crash and Byrnes is like a 93-minute episode of the show...and not one of the better episodes. But, it was cool that the movie was written by Wolf Larson and directed by Jon Hess, the guy who made Excessive Force (1993). In all the technical departments, Excessive Force is a masterpiece compared to this, but at least it got made and onto store shelves and cable listings.

Of course, Crash Riley and Roman Byrnes have lots of arguments, banter, and bickering between them. Pretty much all of it is good natured and lighthearted. Usually Byrnes will say or do something humorous, and there will be a cutaway to Wolf Larson's face in an amusing reaction shot. We give Greg Ellis a lot of credit for putting himself out there as the comic relief. Things would suffer even more without him, even if Byrnes is slightly annoying at times.


There are almost too many cliches to list, and if you've ever seen any buddy cop movie before in your life, you'll pretty much know what to expect. One of the better aspects of Crash and Byrnes was its unwavering devotion to the cliches of the past. It's like a nice, warm blanket you can pull over yourself. Perhaps its one deviation from the formula was that Joanna Pacula beats people up and shoots them. Yes, you get a bit of Joanna Pacula-Fu as she inexplicably plays the terrorist mastermind.

In the end, Crash and Byrnes is just too silly to really dislike. We found a sealed copy at the Salvation Army, and after many months of it sitting on the shelf, we finally picked it up and gave it a chance. If you find it under similar circumstances, that may be the best way to pick it up.