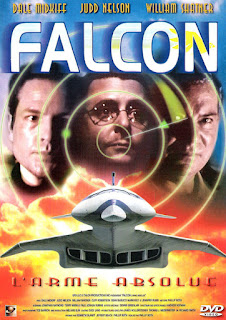 Captain Hank Thomas (Midkiff) is a former Air Force pilot who now works with his father Buzz (Robertson) at a small, family-run airplane hangar. Thomas's quiet life is disrupted when the mysterious Harold Peters (Nelson) and Sharon Williams (Rubin) approach him. They tell him they need his expert flying skills so they can steal the Falcon, a high-tech plane. Once Major Robert Carson (Shatner) becomes involved, things get really serious.


Now roped into a crazy plan with a bunch of mercenary-types, such as Rat (Kiely), Thomas has no choice but to fly the Falcon and land it on a sheet of ice, so it can eventually be sold to the Chinese government for ten billion dollars. As if all that wasn't enough, apparently there's a conspiracy that goes all the way to the top involving Area 51 and government a cover-up (what else is new?) - will Thomas live to eat beef jerky with his stepdaughter Alisia (Roth) again? Or will the FALCON go DOWN?
Falcon Down stars William Shatner, who you may remember from Land of the Free (1998) and some other stuff that we can't quite remember right now. Thankfully, he's at his William Shatneriest here in Falcon Down, as he delivers just about every line in that herky-jerky style we all know and love. Impressively, he manages to do that even if he's only saying one word. At the important scene when he and the other members of "The Company" are trying to intimidate Midkiff into signing on to their mission, Shatner stands next to a lamp so he's in very dramatic lighting. That was a movie highlight. 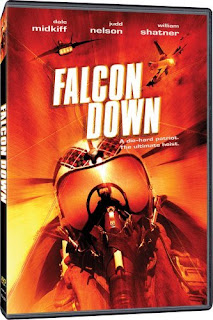 In that hotel room scene, it was quite something to see Judd Nelson, William Shatner, Jennifer Rubin, and Dale Midkiff all together in one small room. Have any of them given interviews as to what it was like to be there? Oh, to be a fly on the wall.

While Dale Midkiff did his best, if he wasn't available, the filmmakers could have gotten Randall Batinkoff. And let's not forget William Zabka is on board here too. We would have liked more Zabka. More Zabka is always better than less Zabka. Both he and Jennifer Rubin shoot their handguns sideways, "gangsta" style, which was funny. When they did that, the movie perked up.


Unfortunately, there are long stretches of the movie with no Shatner. Those gaps are filled with stupid moments, dumb dialogue, boring plane sloggery, and a whole lot of nothin'. When Shatner eventually returns, he's on a flight deck of some sort with an Asian man who looks a lot like Sulu. Coincidence?


It's not all bad, however. Nelson does his best, or at least somewhere close to his best, there's an amusing warehouse shootout involving the Rat character, and we get a rare double We Got Company. Usually it's said once by one character. Here it's said twice in quick succession by two characters.


What Falcon Down should have done is concentrate more on the Area 51/Conspiracy angle than it does. It starts and ends with these "videotaped" segments that seem straight out of a show like Unsealed: Alien Files or Unsealed: Conspiracy Files. While those shows are trying to get the truth out there, it's not their fault they're on a low budget. But those more intriguing elements are not really expounded upon or capitalized upon. That's a shame, because an X-Files-esque knockoff starring Shatner, Judd Nelson, Cliff Robertson, and William Zabka is a really cool idea. But that's more or less brushed aside, sadly.


Falcon Down is a telefilm produced by City Heat Productions, a company associated with Blockbuster Video, so you can be assured that multiple copies were always available at your local branch. Another production company was the Unified Film Organization, or UFO. Coincidence?


Despite its strong cast and a smidgen of decent ideas, Falcon Down is filled with too much mush to be really exciting or interesting. It was a close call, though. In the end, it's really more of a flyover in all of our lives.
Comeuppance Review by: Brett and Ty
Posted by Ty at 4.11.22