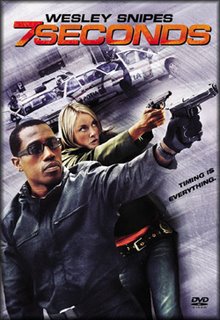 
With 7 Seconds, Wesley Snipes joins the company road show of DTV: Steven Seagal works every day, pumping out a flick a month. Van Damme only works about a quarter of the year, with one or two releases a year. Those are the two main stars, other supporting characters include: Jeff Speakman, Sasha Mitchell, David Bradley, Dean Cain, and Michael Pare. Come out to your local video store today and support this show. It never ends!...Until they die of course.

7 Seconds was a goofy film. Of course it's full of clichés and stupid one-liners, but there's a lot of action and charm to spare. It's better than Unstoppable (2004). Wesley Snipes plays Jack Tulliver, a thief who inadvertently steals an expensive Van Gogh painting. Now tons of gangsters are after him: dead or alive. Wesley Snipes was great as usual as the wise-cracking hero. The first car chase was fun and the action-packed climax was very cool. 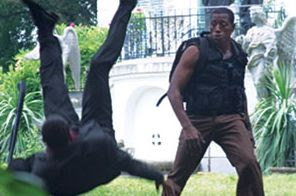 The drawbacks are: The obvious green screen and some of the Romanian actors need to work on their craft a bit more, but everything else is fine. One of the better DTV movies of late.