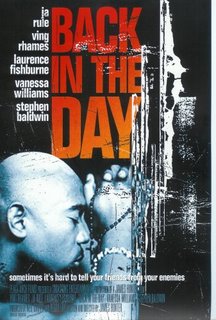 Back in the Day is an interesting, but flawed effort. Ja Rule stars as Reggie Cooper, a honest but sad man trying to cope with the death of his father. He meets his old friend J-Bone (Rhames) who tries to force Reggie into a life of crime. Reggie also falls in love with Alica (Ali) who is the preacher's daughter. Now he has to choose: Love Or Crime. 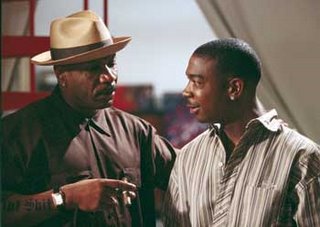 Ja Rule does a competent job as Reggie. At least he's trying to act. Ving Rhames is perfect as J-Bone. He brings a lot of energy and menace into the role. Joe Morton as the preacher is his usual excellent self, but he doesn't do much. The same problem for Giancarlo Esposito as Reggie's Dad. He needed more screen time, also Pam Grier is pretty good as Mrs. Cooper. Tia Carrere and Frank Langella are in it but don't do anything substantial for the plot. You may have noticed that on the poster above the names Vanessa Williams, Stephen Baldwin and Laurence Fishburne are seen....they are not in this movie, it is just a promo poster.


You should see it for the skilled performances of Ving Rhames and Joe Morton and the grittiness of the writing and directing.

Not bad, Great story, was a little dry. But worth the watch.