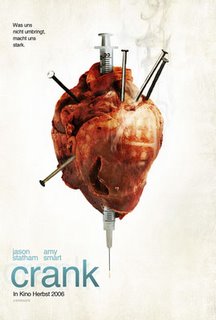 Now this is an action movie! Crank is 85 minutes of non-stop action and excitement.


Chev Chelios (Statham) is a hitman who is injected with "The Beijing Cocktail" by his enemy Verona (Jose Pablo Cantillo). Chev has only an hour to live unless he keeps his adrenaline up. That means he does anything and everything to survive, which includes snorting coke, getting defibrillated and much more. He also has to settle the score with Verona. He kills anybody on his path to revenge. 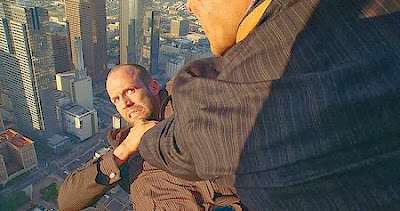 The movie starts out awesome, with the Quiet Riot song "Metal Health" blasting in the opening. Jason Statham personifies cool with this role. You feel for him and his situation. Amy Smart plays his girlfriend Eve and they have a sex scene that's very funny and original. Dwight Yoakam plays Chev's shady friend Dr. Miles. He's very good. Cantillo is entertaining as the villain. The editing and directing are perfect and the movie is beyond fast-paced. The helicopter fight, The car chase, and the arm-cutting scene are the stand-outs. Crank is a blast!

Love Jason Statham, and love movies that don't apologize for being complete and utter action crazy. Great review, I've got to get out and see this one now!

Thanks! Crank is a blast! Definitely would be interested in your opinion.