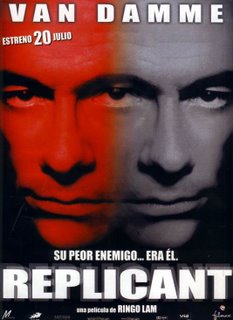 
Unlike Seagal's crop of DTV crud, Van Damme has been making a very strong effort to make his releases better. Replicant is one of them. This is the fourth movie that Van Damme has been in where he plays two people. (See also: Double Impact (1991), Maximum Risk (1996), and Timecop, 1994). I wonder if that's in his contract. The plot is: A serial killer named "The Torch" (Van Damme) is on the loose. Rogue cop Jake Riley (Rooker) has to stop him. When "Torch" leaves one of his strands of hair at the crime scene, the idea is to clone him and stop him.

Van Damme plays the clone like a baby. He has to learn to speak, walk and fight. It's a very good performance. Michael Rooker puts in his usual gruff performance. Ringo Lam directs the action scenes with a lot of style and energy. The climatic fight between both clones is fun but we've seen it before. 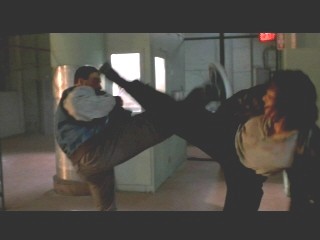 Replicant is definitely worth seeing. The fans will enjoy it and non-fans I think will be surprised by Van Damme's performance.

Great Review! Makes me want to see it with my brother someday.

Didn't VanDumb also do another movie with Ringo Lam that was pretty good? I can't really remember the name or the plot, but I remember it was "Hong Kong-esque", and at one point VanDumb fights with a long chain.