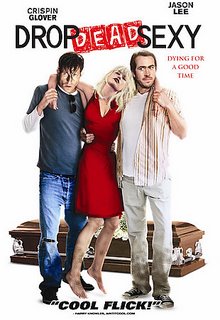 
Drop Dead Sexy is a pretty funny, but dark comedy. The plot: Frank and Eddie (Lee and Glover) are friends who are looking for a big score. When Frank is sent to deliver cigarettes to the evil Spider (Pruitt Taylor Vince), their truck explodes. But the plot thickens when Spider wanted them to die. Frank needs to get money fast, so when he sees that a rich young woman named Crystal (Melissa Keller) died, Frank and Eddie decide to dig up the body and blackmail the husband. They realize her death isn't all what it seems. Eddie also begins to fall in love with Crystal... 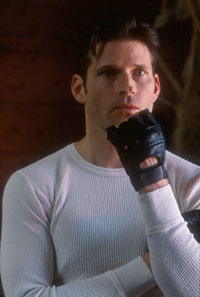 Jason Lee and Crispin Glover have good chemistry together. They make most of the jokes work. The movie does get into some themes with necrophilia, which could turn some people off. Vince plays a scary gangster, Brad Dourif (The voice of Chucky) makes a weird cameo appearance as a way too interested morgue attendant. The movie is set basically around a strip club, so there's lots of gratuitous nudity. (That's not a bad thing...)

This is the time of year when Lionsgate puts a movie out that's more normal. As opposed to shot-on- digital junk like Heebie Jeebies (2005). See also Creep (2004).

Overall, Drop Dead Sexy is worth seeing for the actors and somewhat unusual plot.

Thank you for your review.

Your welcome, Charles! Thought this was a pretty good movie.