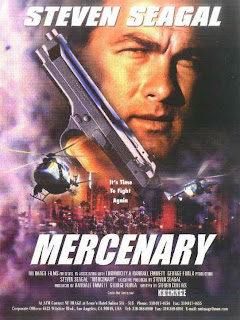 
I liked Seagal.... in his prime. A long time ago (okay, 1989) Steven Seagal was the master of the martial arts, A man who speaks little, but makes up for it in kicking butt... and he was lean and mean. Nowadays, he's fat, he can barely talk above a whisper, and he just doesn't care. But he keeps churnin' out the junk.

John Seeger (you know who...) is an ex-mercenary, CIA, FBI dude, who has to break into a prison, while orchestrating a bank robbery. Then Seeger shoots lots of people. That's about it.

What's with the three word titles? Enough already. I guess people don't think it's a Seagal flick without a three word title. The title doesn't even make sense. A mercenary works for money and has no soul, he doesn't do it for justice.

The only actors good in this is Roger Guenveur Smith as the villain Mr. Chapel and Luke Goss as Dresham. But even they were coasting.

Out For Justice? More like Out To Lunch...and he hasn't come back yet.