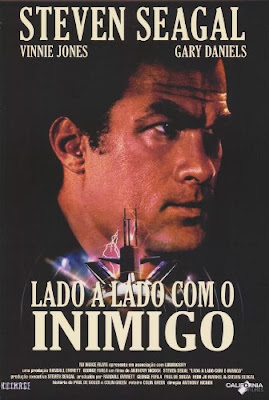 
Seagal's workload was huge in 2005. He had four releases: Into The Sun (2005), Submerged, Today You Die (2005), and Black Dawn (2005). As long as the paychecks keep coming, he churns them out like there's no tomorrow. This time around, Seagal plays "Chris Cody" who is released from prison to go on one last assignment: To infiltrate some double agents or something. It's very confusing. You also can't see what's going on most of the time because to hide Seagal's nonstop weight gain, he is shrouded in black: 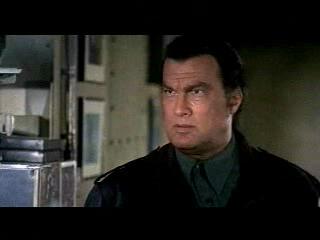 All you see is Seagal's fat head. He also doesn't do his own ADR work. He once again uses a voice double that sounds NOTHING like him. But this time he was trying to be clever and put on an "Cajun accent" to fool people. The saving graces are the performances by top-notch British blokes Vinnie Jones and Gary Daniels.

Here's an idea: Vinnie Jones Vs. Gary Daniels in a duel to the death. Now there's an action movie!

The scene where Vinnie beats the shit out of the poor sniper (if I remember correctly) is just so goddamn brutal!

Also, I kinda loved 'Submerged', in a weird kind of way...