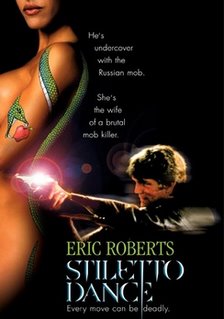 
We all know the truth: Eric Roberts is Awesome! Come on, admit it. I'm a big fan of the man. Julia sucks. Eric is better.

Stiletto Dance is about a cop named Kit Adrian (Roberts) who infiltrates the Russian mob, only to be swept up in a deadly love triangle with Lena (Lucie Laurier) and his partner.

The movie is a lot of fun. It has everything: pervasive swearing, brutal Russian mob violence and a cool performance from the master of Ham: Eric Roberts! Yaphet Kotto makes an appearance as the chief of police. His role is made up of exposition, but he puts in his usual professionalism.