The Covenant: Brotherhood Of Evil (2005) 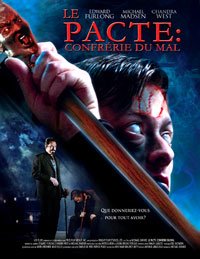 
The Covenant: Brotherhood Of Evil has basically the same title as the "gay" The Covenant (2006), but it's different.

David Goodman (Furlong) is a young businessman on the rise. He's blinded by a random criminal and he wants revenge. He then meets Guillermo List (Madsen) who gives him an evil cane (yes, a walking cane...) to exact his vengeance. But it gets out of hand and now the powers of evil are after him!

As you can tell, the plot to this cinematic sludge is silly. If you want a good laugh, watch this. Furlong is miscast and he looks awful. He's packed on some weight and the suits he wears in the film are so tight on him, they're bursting at the seams. Madsen is okay, but once again he's there for a paycheck. He does have obviously fake facial hair. It looks glued on.

Overall, "The Covenant: Brotherhood Of Evil" is a very ridiculous film that's worth watching for the unintentional laughs.