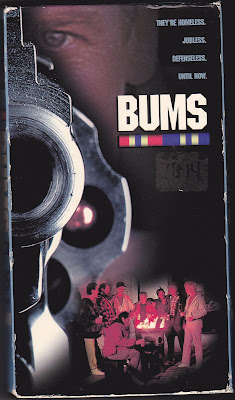 When Master Sergeant Andrew Holloman (McDonald) comes home from the army to find his long-lost brother, he discovers his bro is now a bum. When a guy in a gray suit is going around this unnamed city slicing the throats of the local homeless population, Holloman assembles a rag-tag bunch of misfits (a bunch of bums) into an elite army force to track down the bum murderer.

When the murderer in the gray suit appears in a police lineup with other men in gray suits, he ends up walking because the testimony of a bum in a wheelchair wasn’t enough to hold him.

The local female cop doesn’t want Holloman to take the law into his own hands, but that doesn’t stop him from paying a bunch of bums 10 dollars a day plus meals to do Army training exercises such as push-ups, jumping jacks, and reconnaissance.

Holloman’s second-in-command is a bum named Smiley. He resembles W.C. Fields and when he is not regaling his fellow bums with tales of a “deadly crab hold” around the oil drum fire, he is taking a shower with his clothes on. Part of what Holloman is paying them for is to get clean and he introduces them to new concepts like soap and shampoo.

Other bums include: Malcolm, who helps train his fellow bums, Animal, a big fat bum who doesn’t talk, and Hayashi, the Asian bum. There’s also Sloan, Roach, and Teach who quotes Ben Franklin. They each have their own quirks and personalities. 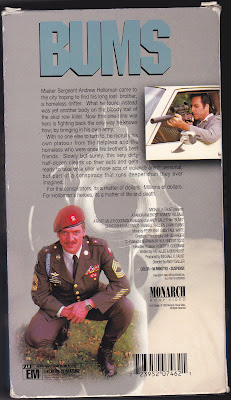 As the gray-suit baddie who now has a gang, is picking off the bums one by one, it is time for the bums to go into “bum-to-bum combat” and discover the truth about why the bums are being murdered. Let’s just say it is a conspiracy that goes all the way to the top (or perhaps all the way to the bottom). Of course, the climax takes place in an abandoned warehouse and then on top of a parking garage.

One of the most interesting aspects of the movie was the role reversal: First Holloman tries to civilize the bums, and then later on in the movie, Holloman goes undercover as a bum and they show him how to become a vagabond.

The movie isn’t really a treatise on the treatment of the homeless in America, nor is it political in any way, which is a good thing. You can tell by the blunt and simple title of “BUMS” that you are just going to be entertained and not lectured.

Speaking of which, the soundtrack is by “The Bums Band”. The songs are catchy blues songs that get you into the spirit of the film. The plot is pretty unique as you don’t often see a guy who corrals a bunch of bums to do his bidding.

Shuffle around aimlessly and beg for change with this classic tonight!