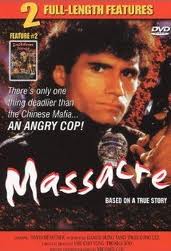 AKA: The Border Of Tong


"There's only one thing deadlier than the Chinese Mafia... An Angry Cop!"

Massacre is a confusing and amateurish production, but on the bright side it features a young David Heavener in his first ever role!

After an unhelpful Star Wars-like crawl at the opening of the film, the paper-thin plot starts off with a "Massacre" where 12 people get shot in Chinatown. Detective Randy Walker (Heavener) is assigned to the case. During his inspection of the crime scene, he finds a origami grasshopper, which is his only clue. Meanwhile, one of the shooters (who looks more and more like Jackie Chan as the movie progresses) flees to Canada and starts to feel remorseful for his actions. He and a prostitute fall in love and attempt to start a new life, but unluckily for them, Walker is hot on his trail.

Heavener doesn't say anything until at least a half-hour into the film, but words might not be necessary because of his tight jeans, rockin' hair, cool bomber jacket, and his proclivity to sit on chairs backwards (the cool way aka: the only way). While sitting in that position and resting his arms comfortably on top of the chair, he is getting yelled at by "The Chief". Who is disgruntled (of course), looks like Don Rickles, and apparently is named "Capt. Boxberger". Viewers are treated to endless close-ups of Heavener's studly face. However, this may be because of poor framing issues. Technical issues such as these permeate the whole film. For example, if you are going to dub the characters' voices, they shouldn't be more unintelligible than the original track. Thus the dialogue is a nigh-unhearable, muffled, garbled mess.

Speaking of audio misunderstandings, Walker is always misunderstanding Chinese customs. One scene in particular stands out where Walker is asking for some Chinese food but has happened into the main brothel of the movie. The waiter/pimp states what is on offer are "girls" but because of his thick accent, Walker mistakenly thinks the special of the day is a food called "Garls". He asks for a "Garls" special with a Coke. Something ensues, if not hilarity. There are other examples, but this is the best one.

Walker fights a guy who is the Chinese version of John Oates of "Hall & Oates" fame. After beating up more people, there is a "Love Theme from Massacre" and then a very off-kilter ending. Massacre would make a great double feature with Tongs: An American Nightmare (1986) with Simon Yam.

Cross the border of TONG tonight with this classic!