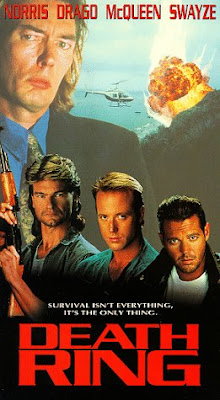 
From the director of Hell Comes To Frogtown (1988) comes Death Ring, a movie that, despite the impressive B-movie cast, could have used the talents of “Rowdy” Roddy Piper.

In this complete and total knockoff of The Most Dangerous Game (1932), Mike Norris portrays local lunkhead Matt Collins, an ex-Special Forces soldier who can’t find his place in the world. So he spends his time competing in events such as “The Survival Of The Fittest” competition.

In this unexplainably televised event, which is a cross between rock-climbing and Army basic training, bored (really bored) evil rich dude Danton Vachs (great name) (Drago) (another great name) sees Collins and kidnaps him, as well as his girlfriend Lauren (Glasser),  who were trying to spend a lovely day at the batting cages. Luckily, “Skylord” Harris (McQueen) witnesses the whole thing before being knocked unconscious by Vachs’ goons. Did we mention his name was SKYLORD HARRIS? Because his name is Skylord Harris.

Skylord is now on the case trying to track down his best friend Matt. Little does Skylord know, they have been spirited away to a creepy island and Collins is forced to play “The Most Dangerous Game” with a multi-racial group of hunters: a Mexican, an American Indian, an Asian, and an Italian. They all go about hunting Collins in their own ethnic-stereotyped ways. When Collins dispatches a man named Mr. Chin, in a flash of brilliance, he posthumously re-dubs him “Mr. Dead”.

Vachs has a control panel set-up so he can communicate with his minions while they hunt Collins. (Also so Collins can spit snappy one-liners to Vachs while deep in the woods.) Vachs' minions also drink snake blood and the titular “Death Ring” is a real piece of jewelry worn by Vachs.

Exactly one hour into the film, we finally get our first “Swayze Sighting”. Don plays John Blackwell, a leftover from Vachs’ previous hunting party. He and Collins team up to get revenge. After searching one tattoo parlor named “Tattoo”, Skylord sees the design of two overlapping triangles (like they are fast-forwarding their wrists) he remembers at the time of the kidnapping. 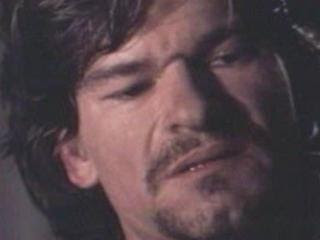 We won’t give away the ending, but let’s just say it involves a “fan favorite death” and heads are gonna roll!

Basically playing the same role as he did in execrably fun Money To Burn (1996) with fellow castmate Don Swayze, we can only surmise that McQueen himself is a man dead-set against sleeves of any kind. Including his car, which is a jeep. Doors are too close to sleeves for this guy! It is “death before sleeves!” as Skylord sleevelessly saves the day in his rockin’ helicopter.

This “New generation of action stars” (as the box only lists their last names, as if that would fool potential renters) is really close to “Lone Tiger” syndrome: where a movie that is chock full of B-movie favorites does not guarantee a good movie. That being said, “Death Ring” is basic stupid action fun.

It predates the very similar but more popular Surviving The Game (1994) by two years. Death Ring was first!

Reading the Firepower review reminded me of this one. I quite enjoyed the whole "sons/brothers of famous people" angle. And it's got that great ending where Mike Norris goes back to pick up the Death Ring. Good stuff.

I'm totally going to try and track down the "novel". Someone's got to have it.

Hope you can track down the novel.