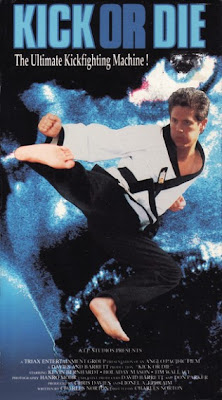 AKA: No Hard Feelings

From the vaults of AIP (Action International Pictures) comes a "Martial Arts" classic: "Kick Or Die"!


AIP is a company that produced a treasure trove of low budget direct-to-video films that specialized in action movies, as the company name implies. Being a low-budget production company, you would think they would have been familiar with their forebear American International Pictures, the original AIP. Why they used that name is a bit puzzling. Even though they made other types of genre movies, it was with action that they hit their stride. Although they ceased production in 1994, they left behind a legacy of VHS gems such as White Fury (1990), Alien Seed (1989), and Shredder Orpheus (1990) (Maybe they weren't all gems).


Kick Or Die is about a serial rapist who is terrorizing young co-eds at a small town college. The staff hires Don Potter (Bernhardt) to teach women self-defense. Obviously the college was aware of his status as the ultimate kickfighting machine. The ultimate shootfighting machine must have been taken. Bolo is a busy man.

While he's there Don encounters local bikers, who basically turn into punching bags for him. During one of his many brawls at a restaurant, he meets Eve Campo (Mason), and a relationship ensues. She wants to be a singer\dancer and there is an elongated dance sequence at a dance club. Don eventually confronts the rapist at his house and proceeds to punch him and not kick him, which was disappointing to say the least.


For a somewhat cool title, it does not live up to what it promises. There is surprisingly little kicking and virtually no dying. Kevin Bernhardt is no Sasha Mitchell in the action-actor department. He's not even Daniel Bernhardt. The world is too small for two DTV Bernhardts. Who should stay? Only you can decide.


The quality of this movie is typical AIP fare. If you have seen any AIP movies, you know what we're talking about. There is more kicking in the elongated dance sequence than in the whole movie. Maybe that is what the title refers to.


If you want to see a movie where a man kicks bikers off their motorcycles, this movie is for you. Puff Daddy clearly ripped off "Kick or Die" when he "thought" of "Vote Or Die". See the original tonight.