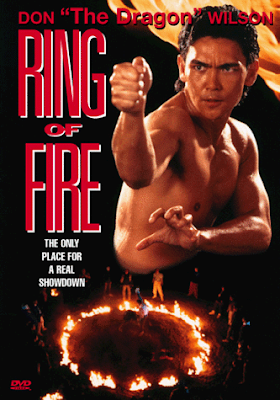 
Ring Of Fire is an above-average beat-em-up but with a strong romantic component.  Highly watchable, think “Romeo & Juliet” but with more kicking.

“The Dragon” stars as Johnny Woo, a good-natured doctor who is constantly treating victims of white and Chinese gangs who are always getting into brawls both in and out of the ring. His brother Terry (Steven Vincent Leigh) is a professional martial artist who fights in the ring. The two brothers practice by their pool. Despite Johnny’s superior abilities he chooses to heal and not to fight. As he says, “You beat ‘em up, I patch ‘em up”.

Sgt. Lopez (Delano) is trying to break up the warring factions but is unsuccessful. Enter Julie (Ford) who listens to a fortune cookie and begins to fall in love with Johnny. The problem is she’s engaged to jerk Chuck (Murdocco) who coincidentally is a martial artist and hates Chinese people with a passion and is friends with Julie’s brother Brad. When Johnny and Terry’s pal who is the comic relief of the film, gets beat up by the evil white gang, Johnny and Terry are out for revenge.

The final battle involves a Ring Of Fire and attaching broken glass to your hands. Chuck is crazy enough to actually go through with it.

One of the most interesting aspects of the movie is the racial conflict and it’s not sugarcoated. Racial epithets are used incessantly.

What is worthy about ‘Fire is that you care about all the characters including their mothers and grandmothers which is unusual for an action movie. Sure, there is a shot of Aunt Mei which is so scary it will haunt your dreams, but usually she is kindly and dispenses wisdom.

For example, when the comic relief (Lee) gets beat up, you care because he stole the movie with one of the best lines: (“Have some of Bruce Lee’s favorite drink – Wataaaaaaahhhh!”) before he punches and kicks his opponent in the ring. Why aging, balding, overweight punks in their mid to late 40’s (except for Gary Daniels who is inexplicably hangin’ out with those dudes…) have nothing better to do than chase an innocent Asian man around Venice Beach in some in the same exact places as the classic Thrashin', (1986) and pull down his pants, the world may never know.

Brad looks like Vanilla Ice and has funny outfits. Brad and Chuck are stupid, unlikable oafs. Brad seals his fate as the ultimate jerk when he interrupts Julie’s aerobics class and slaps her in front of everybody. Contrast this with the tender romance with Johnny. They go to Chinese New Year festivities and they go the beach. We know Julie loves Johnny for his true self because at a masquerade ball, he is dressed as the phantom of the opera and the romance begins. 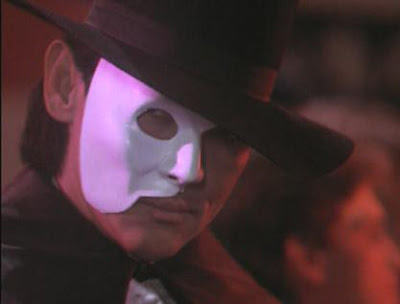 Brad and Chuck on the other hand look really gay with leather straps and skirts. Clearly Johnny is the winner here. The romance between Johnny and Julie take a dive when Julie shows up to a funeral wearing a black dress (and in Asian culture that is inappropriate.) Will Johnny and Julie triumph over racist evil? Find out today!

Get into the “Ring” with this classic tonight!