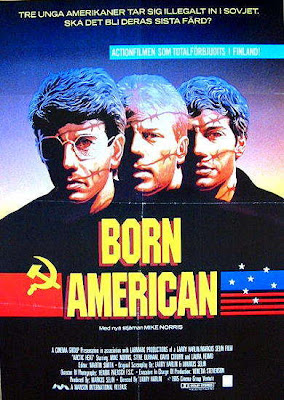 Oft-forgotten among these more well-known titles, is Born American. This time around, three American party dudes, Savoy Brown (Norris), Mitch (Steve Durham), and K.C. (David Coburn), rather than go to a warm, tropical climate, decide to drink beer and enact their wacky shenanigans on the snow-filled border between Finland and Russia.

Sure, everything is going swell between their sessions of shooting their giant bow & arrow at playing cards and doing the limbo under the actual border, but for a fun time prank, Savoy decides it would be a real hoot to cross over some barbed wire and some armed guard towers into Russian territory. 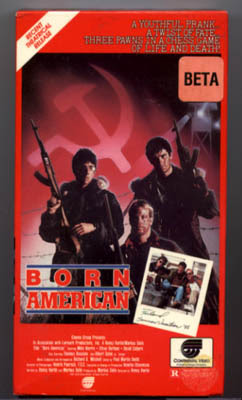 Unfortunately, after a mix up or two involving the humongous bow & arrow, now the whole town is after them. The gang is taken in for questioning and the evil warden thinks they are a terrorist group. So they are thrown into prison. The place is a rat-infested hellhole and K.C. is injured and slowly dying. Luckily, there is "The Admiral" (Rasulala), a friendly American who lives in the basement of the prison and works for the C.I.A. 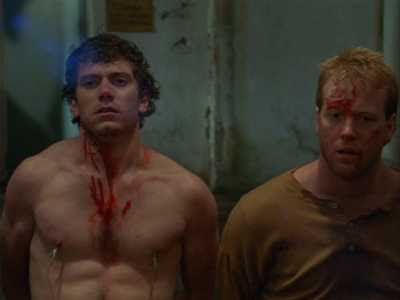 It all comes to a head when the gang is forced into a deadly game of human chess that involves some light punchfighting. Will Savoy and his buddies escape the prison with their life intact?

Just imagine a cross between the aforementioned Red Dawn and Midnight Express (1978). Norris later of Death Ring (1992) fame does a non-silly (as opposed to later in his career) job as Savoy. He even yells not once, not twice, but three fan favorite yells: "NOOOOOOooo!" He also has the prerequisite training sequence before the big human chess match. There are some rocket launcher blow-ups that are welcome. 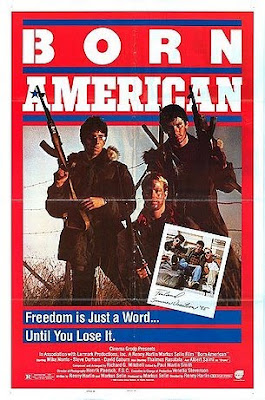 The problems are: the movie takes itself way too seriously. Also it is hard to feel bad for the gang because they are in this predicament because of their own stupid decisions.

All in all, Born American is a decent addition to the 80's-movie-fascination-with-the-cold-war-with-Russia boom.

My schoolmate's father was the distributor of the VHS in Finland. I remember watching the unrated version at a birthday party. This was Finnish director Renny Harlin's first movie. He went on to direct Die Hard 2 and Cliffhanger. The movie is a bit clumsy, but quite likable.

That is really cool! He must have some interesting stories about being a distributor.

Agree about the movie too. Definitely not bad at all...messy at times but watchable.