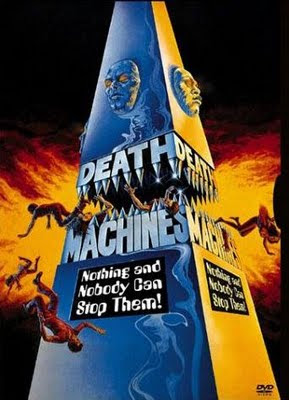 
"Nothing and Nobody can stop them!"

"The Death Machines" are three men that dress in black and work for an Oriental woman with big hair. They know Kung-Fu and many other ways to kill. Also it is basically impossible to kill them. They are almost supernatural.

They are going around town killing gangsters in funny ways. Most notably, crushing a guy in a phone booth with a bulldozer. The head gangster meets with the Oriental lady and tries to convince her to have the Death Machines (or DM's for short) stop killing his men.

Soon there is a big brawl in a karate studio where the DM's kill everybody except one man who loses his hand in the fight. While in the hospital, he begins a romance with the nurse taking care of him. He then vows to get revenge on the Death Machines. Also, two detectives are assigned to the case to see what the heck is going on.

Could this be Ron Marchini's greatest role ever? The only thing he "says" in the movie is when he screams "Raaaaaa!!!" like a banshee. Other than that, it is a totally silent performance. He lets his ballet-like karate moves do all the talking. Marchini has never been more light on his feet and graceful. His Ron-Fu really shines in this effort. 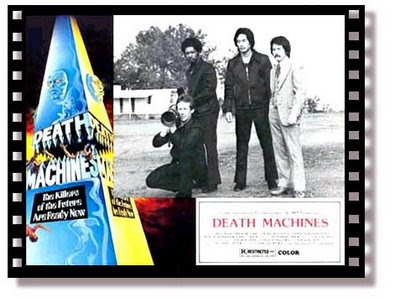 There are a lot of great 70's suits and mustaches, and the keyboard soundtrack really stands out. There are some fun brawls and action sequences, including a scene with a certain fan-favorite weapon: a rocket launcher.

A memorable scene occurs when Marchini just wants to sit in a diner and very slowly eat his hamburger. Without any provocation on Marchini's part, a bunch of sleazy and crude bikers hassle him by calling him "Tarz'n" repeatedly. On the soundtrack there is a song about the holy trinity and then all three Death Machines kick into action and beat up all the bikers. Funnily enough, there is a biker who wears a jean jacket with no shirt underneath, and only the bottom snap is holding it all together.

Another worthy beat-em-up scene involves the guy with one hand (his one glove pre-dates Michael Jackson) and some local toughs who just want to trash their local watering hole. After turning over some tables and smashing the front window to pieces for no apparent reason, he punches Hand-man and he lies on the bar unconscious. There is a fountain behind him and it appears that the water is being spurted out his nose. His girlfriend comforts him, but the scene is very comical. 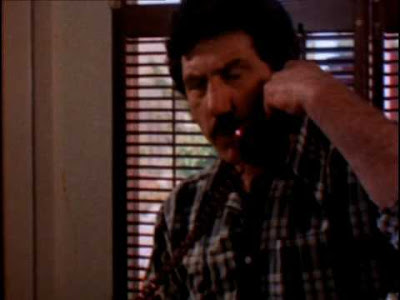 When the movie finally ends, there is an always-welcome freeze frame. But in a shocking twist, it overstays its welcome. There are no end credits at all, but the freeze frame is there for about the same length as the credits would be. So it is a very, very long shot of the Death Machines in their spiffy suits.

Interestingly, the trailer makes it seem like it is a futuristic sci-fi thriller. What it is, is a very fun, ridiculous, silly action-packed drive-in flick 70's style.

If you have any appreciation for this kind of movie, you will be sure to love "Death Machines"!

I caught this one over the past weekend and dug it way more than it had any right to be dug. The title sequence, despite having little to nothing to do with the actual movie, looks great and really brings home the late 70s vibe. The imagery would have been equally at home on a Black Sabbath album cover.

The synth score is just incredible and I loved how the main song functions as an audio cue before the Death Machines start tearing shit up from scene to scene.

Eric Lee makes a brief cameo as the martial arts instructor and he and Kyriazi worked together a few more times. Having seen this one, I'll definitely be seeking out the rest of Kyriazi's all-too-short catalog.

Death Machines is a Ron Marchini classic for the ages. Did you see our review of Kyriazi's Omega Cop? Also we must have missed Eric Lee. Thanks for the info!