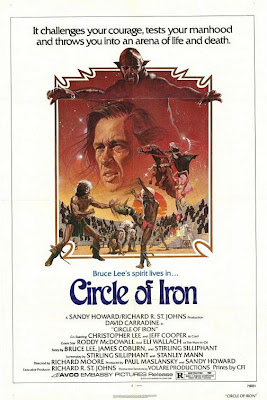 AKA: The Silent Flute


Circle of Iron is an extremely interesting and worthwhile movie that even non-action movie fans can easily enjoy.

From a story by Bruce Lee, Lee worked on the screenplay with James Coburn and Stirling Silliphant (both students of Lee's), and Lee was supposed to have starred in the film, but then he made Enter the Dragon (1973), got famous, and died. The script was then reworked, but it retained all of the Zen philosophy that Lee wanted to include.

Set in a timeless, mystical land, Jeff Cooper plays Cord, a martial artist who becomes a Seeker, a man on a quest to find The Book of Knowledge, and the man who wields it, Zetan. On his quest, he must go through many trials and tribulations, and he meets many people along the way, most of them played by David Carradine. My favorite of Carradine's four roles in the film is The Blind Man, who is a Zen master who fights with his flute, and has a lot of great quotes ("A sword cannot cut itself", "You cannot step on the same piece of water twice", etc.). 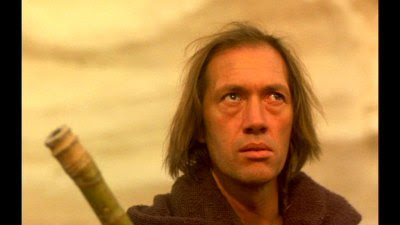 Cord's relationship with him is stormy because Cord doesn't always understand The Blind Man's mysterious ways. The other three roles interpreted by Carradine are Death, who has a minimal part in the film, The Monkey Man, whom Cord must fight as one of his trials, and Chang Sha, the leader of some kind of traveling show, and a relationship with one of his wives, Tara, provides some more food for the interplay between Cord and The Blind Man, as Cord becomes less of a musclebound meathead and more of an enlightened human being.

Perhaps feeling that Jeff Cooper as Cord wasn't quite enough as the main hero (Imagine a cross between John Saxon and Sam Neill with long blonde hair, who is shirtless the entire film), Circle of Iron is littered with welcome, famous faces, including Roddy McDowall, Christopher Lee, and in an especially memorable role, Eli Wallach. His "Man in Oil" is reminiscent of Bunuel's Simon of the Desert (1965), and, in fact, the whole film has a vaguely Bunuel-esque quality. 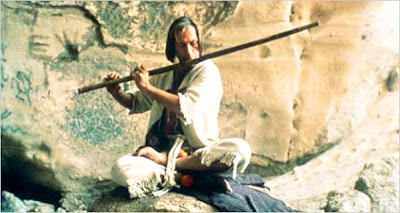 If you were to put Conan the Barbarian (1982), Deathsport (1978), The Holy Mountain (1973), Lao Tzu's Tao Te Ching, a book of Zen quotes, and the few Bruce Lee movies made, and put them in a blender, and poured the result into your DVD player, the result would undoubtedly be Circle of Iron. NOT to imply the film is a hodgepodge; it's definitely not. The movie flows beautifully, and has some great matte work, cinematography, and amazing Israel locations. 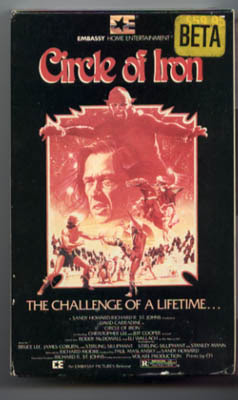 Circle of Iron is action, but different. You will be involved in the film and it will make you think. Far from your average beat-em-up or chop socky outing, I would strongly recommend Circle of Iron for the discerning action movie fan, or anyone who wants a different, intelligent, engaging movie.

What ever happened to Jeff Cooper.

Good question. He should have been a bigger star.