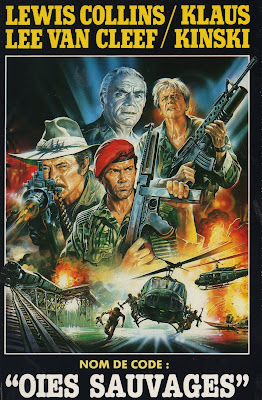 
"This is a corporation. Their business is war. For them, the jungle and the city are the same."

You know, it's funny. You'd think a movie with a legendary cast filled with personal favorites (Borgnine, Van Cleef, Farmer and Kinski), produced by a legendary German producer (Erwin C. Dietrich), and helmed by legendary Italian director Antonio Margheriti, and filmed in very scenic locations, the results would be, well... legendary.

Sadly, that is not the case. It's not that Codename: Wildgeese is bad, but it doesn't live up to the promise of its cast and crew. 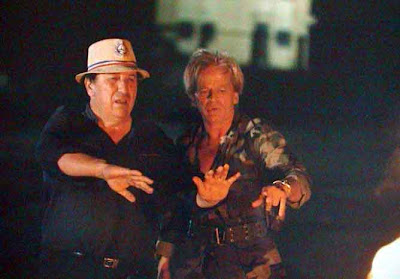 Kind of going along in the vein of The Dogs of War (1980), The Dirty Dozen (1967), the original Inglorious Bastards (1978), and the Eye of the Eagle series (the first one in 1986 and the other two both 1989), and, in true Italian exploitation fashion, basically fashioning an unrelated variant on The Wild Geese (1978) Codename is about a group of men, led by Wesley (Lewis Collins) who invade the "Golden Triangle" (the border of Burma, Laos and Thailand, apparently), to destroy the opium factories of a Burmese warlord. They are hired by DEA agent Fletcher (Borgnine) and his associate Charlton (Kinski) for the crazy, more-impossible-than-impossible mission that you'd have to be downright insane to even consider considering.

It certainly seems dangerous, as the next hour or so consists of people shooting machine guns, guys in brown uniforms falling off guard towers, all manner of blow-ups, including many exploding huts, and Mimsy Farmer shows up as the token woman and also the token reporter that got trapped by the evildoers who put her in a cage. After a few more blow-ups and maybe a double-cross or two, the movie ends. 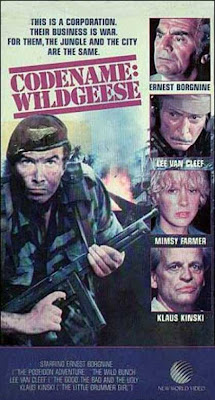 The problem is, there is little-to-no character development. Even with a vast array of tools at your disposal to involve viewers in your movie, if you don't know who the characters are, or anything about them, the moviegoer begins to lose interest because you don't really care about their fate. So, I would say "Codename: Wildgeese" falls prey to "Lone Tiger syndrome", that is, just because you have a great cast doesn't mean your movie is going to be good. That being said, there are some cool aspects, such as a helicopter with a flamethrower attached to it, and some of Margheriti's classic miniature work, best exemplified in an early chase sequence when Collins' car is speeding through a tunnel, and then he cuts the wheel to the right and, shockingly, drives along the side wall of the tunnel! It's moments like this when Codename comes alive but they are few and far between. 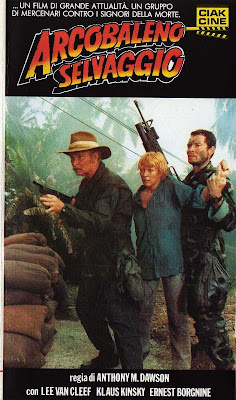 As an avid Italian horror movie fan, I'm much more familiar with Margheriti's Castle of Blood (1964), Cannibal Apocalypse (1980), which does have some action/war elements, The Long Hair of Death (1964), The Virgin of Nuremberg (1963), Seven Dead in the Cat's Eye (1973), Web of the Spider (1971), also with Kinski, and, while not technically a horror movie, the ultimate classic Yor: Hunter from the Future (1983) (a must see). Of his 80's action output that I have seen, it seems the finest is The Last Hunter (1980)...so see that if you want entertaining Margheriti action at its best.