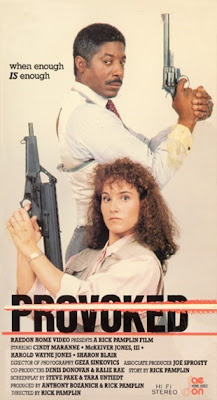 
Have you ever been walking down the street, minding your own business, when an interracial gang pulls up in a car and asks you to join them? Well that's exactly what happens to Randy (Von Ornsteiner) when a vicious group of thugs comprised of Loverboy (whose shirt is perpetually open revealing his beer gut, and happily smiling, proclaims, "I was charged with rape!"), his mother Big Momma (whose character predates Big Momma's House (2000) by eleven years and predates Big Momma's House 2 by a whopping seventeen years - and is one of the best characters in Provoked), Slick, the token Asian, and Mad Dog, a white guy who wears a Members Only jacket and headband, and inexplicably carries a Tommy-Gun). They recruit Randy (now dubbed "Nick The Knife") to steal some money from the payroll office of the Sun Meadow Wines Building.

The heist goes awry when after shouting "gimme money!" repeatedly yields no results, they take four hostages. One of which looks like Estelle Getty and makes ear-piercing but funny noises. Unfortunately for them, the husband of a woman named Casey Kennedy (Maranne) is inside. She had plans to go on her honeymoon (Don't be alarmed when you see her showing off her new house on a homemade video, no one taped over this movie), but her newlywed husband Michael (Bob Fall) is inside.

Captain Rader (Jones III) is called in to handle the situation. Casey believes the police are moving too slow but Rader is having his own squabbles with Mayor Bender (Nick Roberts). Will Casey take the law into her own hands and save her husband or will McKeiver Jones III stand in her way as the gang is getting angrier and angrier?

First a note about the name McKeiver Jones III. It is AWESOME. His first name is MCKEIVER. His last name is JONES. He is not the first, or the second. There have been at least three people in history named McKeiver Jones. Hopefully he had a son and his name is McKeiver Jones IV. His legacy should live on. In all seriousness, he is like a cross between Robert Townsend and Carl Weathers.

One of the flaws of the movie is that MJ-III should have done more. He doesn't show up until 29 minutes in. Yes, we had a McKeiver Watch. He just stands around and barks into a megaphone. It would've been nice to see him participate in some action scenes.

Then again, maybe not. The whole movie is amateurish and clumsy. The technical aspects of the film are inept. Most of the movie takes place in an unfurnished room in an office. The keyboard music score sounds like a drunk four-year old picking keys at random. However it did have a good message about cutting through all the bureaucratic red tape and just killing the baddies yourself. Predating 15 Minutes (2001) by twelve years, Provoked tries to make a comment about the media and crime. Most humorously when reporter Carla McKenzie (Porn star Zee) insensitively asks Casey in an on-camera interview "When do you think they will kill your husband?".

The tagline on the front of the VHS box is: "When Enough IS Enough." It is puzzling why the word "IS" is concentrated on so much. On the back of the box, it claims that the action scenes invoke Sam Peckinpah. Having choppy slow-mo in every action scene is not the same thing as his classic works.

On the bright side, the character of Machine-Gun Joe (Sprosty) livens things up in the latter part of the film. But even he should have done more.

Supposedly shot in eight days for $130,000 and released on Rae Don Home Video, We think it is time to get your McKeiver Jones III on.